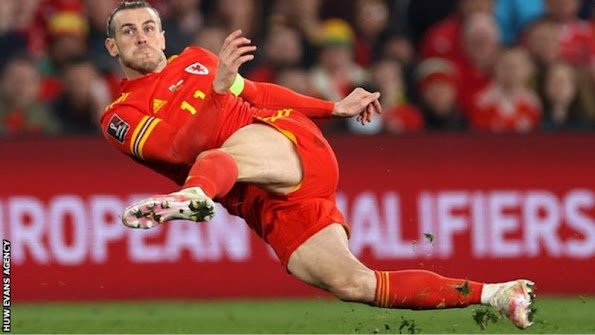 It's why those supporters noted with some amusement that it was the same part of Bale's body that was blamed for his absence from Real Madrid's squad for last Sunday's defeat against Barcelona.

This was the latest in a long line of injuries which have blighted Bale's time in Spain and, for the country's football media, the latest betrayal.

He may have won four Champions Leagues, two La Liga titles and a truckload of other trophies with Real but, according to some in Spain, Bale's inaction for his club - and his continued, heroic service to his country - makes him a "parasite".

When he was pictured smiling while training with Wales this week, days after missing El Clasico, Spanish newspaper Marca's front-page headline was a sarcastic: "It doesn't hurt anymore."

Bale has played two hours of football in six months for Real and made just two appearances since the last international window in November but, on Thursday, he was Wales' saviour once more.

It was written. In a must-win, one-off World Cup play-off semi-final at home to Austria, Bale scored two magnificent goals to inspire a 2-1 victory and burnish his legend.

His first, a stunning free-kick, sparked delirious scenes at a packed and emotional Cardiff City Stadium. His celebration, an impassioned roar and grab of his Wales badge, matched the goal.

Was there more to his scream for the television camera than pure joy? Was there a message there for his critics in Spain?

But he did then add: "It's disgusting. They should be ashamed of themselves. I am not fussed, end of.

If such moments have become rare for Bale in a Real Madrid shirt, Wales fans needed no reminding of their icon's propensity for outrageous, match-changing moments.

This may have been his first international goal from a free-kick since Euro 2016, but it was his 37th for Wales in total, extending his record as his country's all-time leading scorer in men's football.

And just to emphasise the fact that he is still capable of greatness, Bale added a stunning second, taking the ball in his stride and unleashing a powerful strike into the far corner.

It was bedlam in the Canton Stand, a riot of red shirts and bucket hats and a rendition of Don't Take Me Home, the anthem of Wales' odyssey to the Euro 2016 semi-finals.

Simply qualifying for that tournament was a significant achievement for Wales, who had been absent from major tournaments for 58 years until that point.

They followed that by reaching the knockout stages of Euro 2020 and, thanks to their victory over Austria, Robert Page's men are one win away from qualifying for a first World Cup since 1958.

"I don't think it's sunk in properly yet. What a game, what a night, what an occasion," said Page.

"The star man turns up - I have just said to him that's the best free-kick I have ever seen in my life.

"He hasn't played many minutes but at least he has been training day in, day out. Did we anticipate he would play 90 minutes? Probably not.

"We knew we would get an outstanding hour out of him. In the end he cramps up and we take him off."

Wales' play-off final will be a one-legged tie against Scotland or Ukraine, likely to be in June.

Bale said at the beginning of this campaign that it might be his last chance to qualify for a World Cup, and that doing so would be an achievement to rank alongside his many illustrious club feats.

Now he is just one game away.

"We will enjoy tonight. There is still another tough game against either Scotland or Ukraine and we will be ready for that when it comes."

Who is to say he cannot produce more magic to take Wales to that elusive World Cup? Not even a bad back can stop him.