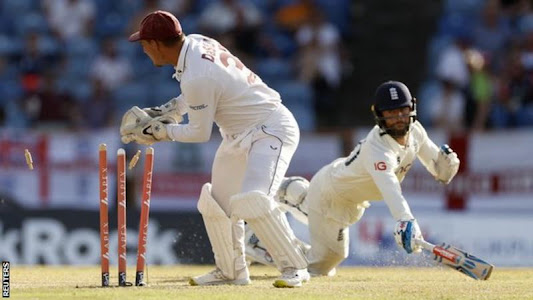 Having begun with hopes of pushing for victory themselves, the tourists were thwarted by the West Indies lower order before they collapsed in abject fashion in their second innings.

Joshua da Silva reached his maiden Test century in the morning session, frustrating England with a stand of 52 with number 11 Jayden Seales before West Indies were finally dismissed for 297.

That gave the hosts a first-innings lead of 93 and in response England's top order folded to 39-4 - captain Joe Root out for five and all-rounder Ben Stokes four.

Jonny Bairstow and opener Alex Lees offered some resistance with a dogged stand lasting 24.4 overs but when Bairstow was caught behind for 22, Ben Foakes followed in a calamitous run-out five balls later.

Lees made 31 before he was castled by Kyle Mayers - the seamer ending the day with remarkable figures of 5-9, his first five-wicket haul.

Another dark day for England

England's winless run now looks set to stretch to nine Tests. They had dark days during their 4-0 Ashes defeat but this ranks among them, given West Indies are eighth in the world Test rankings.

When play began West Indies led by only 28 and if England had taken the final two West Indies wickets quickly they would have hoped to set a challenging target.

Instead the bowling was toothless and tactics puzzling.

Then, on a pitch displaying some uneven bounce but on which West Indies lower order survived for more than two hours, England's batting capitulated. As happened repeatedly in Australia they were not able to cope when the pressure was on.

Only Lees, who got a ball that kept low, was unfortunate. The rest of the batters were dismissed in disappointing fashion.

Root was one of those - he played a tired waft on five to be caught at slip off Mayers, the second time the medium-fast seamer has dismissed him in the Test. Root's position as captain will now come under serious scrutiny.

England's 'red-ball reset' looks to be heading to a fourth consecutive series defeat.

At one stage it looked as though England would not make a fourth day.

Zak Crawley was the first to fall. He had already been dropped once and almost caught hitting over extra cover when he loosely drove for a third time and was caught at second slip from his 11th ball.

Root followed in the ninth over - his total of five runs across both innings is his lowest since 2015.

Mayers was not even picked for the first two Tests in this series but before long he had Dan Lawrence bowled for a duck when playing no shot and Stokes caught behind as he attempted to leave.

Lees and Bairstow showed the same calm, steady accumulation that had served Da Silva well earlier in the day. That was until Bairstow tried to swipe Alzarri Joseph off a length and was caught off an under edge.

The sight of Foakes coming up short diving through the dirt in attempt to make a unnecessary second run summed up England's day.

Typically it was Mayers' throw from the deep that caused the run-out.

Even before the batting collapse, England's day was poor.

Despite having a ball just six overs old they showed little intent to dismiss Da Silva. As a result he was able to quietly but astutely accumulate while the match meandered.

After Kemar Roach nicked Saqib Mahmood down the leg side for 25, Seales, whose previous high Test score was seven, survived for more than an hour alongside the wicketkeeper.

England can point to misfortune - Seales should have been out lbw for a duck to Mahmood when the lead was just 41 and other chances did not go to hand - but to do so would be to ignore their shortcomings.

When Seales later planted Leach for six over long-on it only heaped more misery onto a side looking increasingly frustrated.

Da Silva accelerated as he neared his century, first attacking Leach and then clubbing Craig Overton for back-to-back boundaries to reach the landmark. He celebrated wildly and afterwards admitted there were tears in his eyes.

A ball later came another moment emblematic of England's toil. Da Silva seemed to nick Overton behind and despite reviewing walked from the field. However, replays showed he had in fact missed the ball and as a result he and the England players had to be recalled to the middle.

In the end, Root himself ended the partnership and the innings by having Seales caught and bowled for 13 as Da Silva ended 100 not out.

England assistant coach Marcus Trescothick, speaking to BBC Sport: "It is disappointing - we've had a tough day. The guys are pretty despondent at the moment but we'll look at it and try to learn from the mistakes we've made and try and be better when our next opportunity comes around in the summertime.

"You can't have days like this in Test cricket when the series is going down to the wire, but unfortunately we have."

BBC cricket correspondent Jonathan Agnew: "This batting performance sits comfortably alongside what we saw in Australia. It was desperate stuff.

"England have thrown this away. Only Alex Lees can be counted as blameless in his dismissal. The rest were all either poor shots or misjudgements, or in the case of Foakes, a ridiculous second run."

West Indies all-rounder Kyle Mayers to BBC Sport: "It was a brilliant day for us. Joshua and the tailenders inspired us to go out there and perform like that this evening. The momentum slid straight into the bowling.

"It would mean a lot to beat England - from the beginning people have been speaking about how historic this series is because they haven't beaten us at home for a while so to beat them would be great."