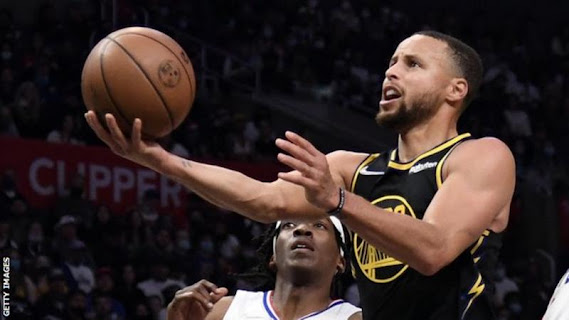 Stephen Curry inspired the Golden State Warriors to a seventh straight victory as he scored 33 points in a 105-90 win over the Los Angeles Clippers.

Curry scored seven three pointers to take his tally to 105 in 19 games.

In doing so, he broke his own record for the fastest player to reach 100 three pointers in a season.

The Warriors, who have the best record in the NBA with 18 wins and two losses, next play the Phoenix Suns, who have won their past 16 games.

Curry scored 13 points, which included a burst of scoring after he felt aggrieved at not being awarded a foul, in the fourth quarter.

"I thought I got fouled so I wanted to let the emotions out and then you let it go and then you just play basketball," said Curry.

"For me individually and for our team, I think we fuelled off of that and just worried about putting the ball in the basket and that's when the avalanche started."

LeBron James also scored 33 points to help Los Angeles Lakers beat the Detroit Pistons 110-106, while Giannis Antetokounmpo contributed 26 points and 13 rebounds for the Milwaukee Bucks as they earned a 118-100 victory over the Indiana Pacers.

The Memphis Grizzlies, helped by 21 points from Dillon Brooks, saw off the Sacramento Kings 128-101 and the Boston Celtics registered a fourth win in six games with a 109-97 victory over the Toronto Raptors.