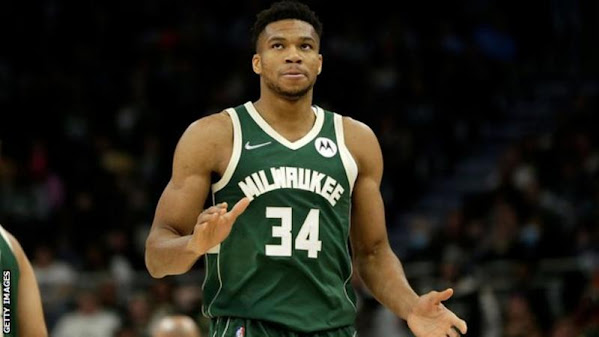 Reigning NBA champions the Milwaukee Bucks recorded the largest half-time lead in their franchise's history as they routed the Orlando Magic 123-92.

The Bucks led by 41 points at halfway, with seven players finishing a dominant performance with double figures.

It marked the Bucks' fourth consecutive win, and ninth in a row over Orlando.

The Magic - without the injured Cole Anthony - have now lost six of their last seven games.

The Bucks held a moment of silence prior to Monday's game for the victims of Sunday's Christmas parade crash which happened 20 miles west of Milwaukee.

Five people were killed when a driver ploughed into a crowd, injuring many more.

Elsewhere on Monday, Kevin Durant scored 27 points as Eastern Conference leaders the Brooklyn Nets rallied for a 117-112 win over the Cleveland Cavaliers.

The Phoenix Suns, second in the Western Conference, recorded their 13th successive victory by edging out the San Antonio Spurs 115-111.

The Suns' winning streak is their longest since the 2006-07 season, when they won 17 straight games.

Jaren Jackson Jr. scored a game-winning basket with 6.7 seconds left as his Memphis Grizzlies beat the Utah Jazz 119-118, while the Los Angeles Kings fell to their eighth defeat in nine games at the hands of the Philadelphia 76ers, who won 102-94.

There were wins too for the Charlotte Hornets, Boston Celtics, Atlanta Hawks, Indiana Pacers and Minnesota Timberwolves.