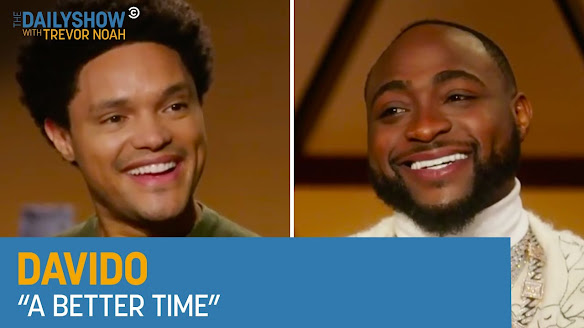 Afrobeats heavyweight artist, producer and DMW record label boss, Davido made his first appearance on “The Daily Show” with Trevor Noah and it was an interesting conversation.

In this interview, the singer explains how he became such a worldwide success, how one of his songs became an anthem for protest, and how to pronounce his name.

To begin, Davido talked about the different ways people pronounce his name, depending on where they are in the world. “Obviously, my name is David. So, to me, it’s just like whatever way you want to say it”.

Talking about how widely Afrobeats is now appreciated all around the world, Davido says:

Thank God. I told them years ago. I remember 2016 when I first got my deal in New York. I signed right here in New York, down the road in the Sony building and they were really not sure of what this sound would be like. And I told them, “you guys might not understand now but in a couple of years, this is going to be, if not the biggest, one of the biggest genres in the world”.

I did parts of my university in Alabama and I remember back then, one of my favourite bands from South Africa was Freshly Ground. In Nigeria, it was D Banj, P Square, etcetera… I was young, I went to college at 16, and I remember in my dorm room, they’ll be like “Yo. Yo, what’s that? Them drums is going hard! They sound good.” So, I always knew that eventually, it would be appreciated.

On what it is about Nigerians that made it possible to take African music globally, he says:

I want to, first of all, give a shout out to all the Nigerians in the diaspora. When I say that, I mean the Africans that are not in Nigeria, the ones in America, Europe, London. Everybody in the world has a Nigerian friend.

My music personally started from  Atlanta, New York. It started from Nigerians being in the club and telling the DJs that “Yo, I want to spend $50,000 today but play Davido’s music when my bottles are coming out…

Watch the conversation below: