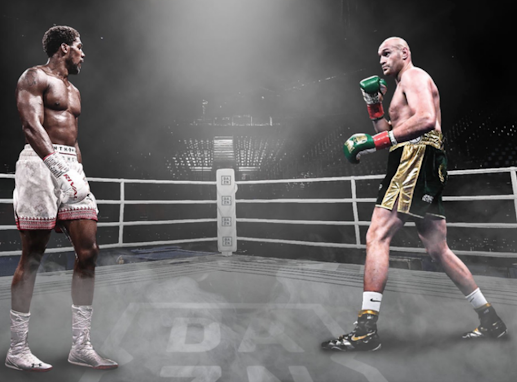 WBC champion Fury looked set for a unification bout with Joshua earlier this year before an arbitration hearing ruled he had to fight Deontay Wilder.

"I was hoping Joshua could win the fight, but he couldn't - and that's none of my business," said Fury.

"Did I watch the fight? Yes I did. Was I absolutely wounded that he won? Yes I was."

Unbeaten Fury will face American Wilder on 9 October in Las Vegas in what will be their third fight. The pair drew their first bout in December 2018 and the Briton won the next by a seventh round knockout in February 2020.

The trilogy fight was scheduled to take place in Las Vegas on 24 July but was postponed after Fury tested positive for coronavirus.

"The only thing I'm bothered about is beating Deontay Wilder, and that's the most dangerous heavyweight out there," Fury added.

"In my opinion, Wilder beats Joshua, Usyk, all the rest of the division, comfortable - but he cannot beat me."

Meanwhile, Joshua plans to activate a rematch clause to fight Ukraine's Usyk again following the second loss of his career.

"My advice to Joshua in the rematch is get stuck in the best way he knows how, put his best foot forward and swing away, Jack, swing away," said Fury.

He added he had "no interest in slating anybody or kicking anybody while they are down" as "it ain't my style".

"I like to pick on someone who is doing well, successful, on top of the game - I don't like picking on people who are down and probably at their lowest point and probably mentally unstable and unwell with a big loss after such a long reign," said Fury.