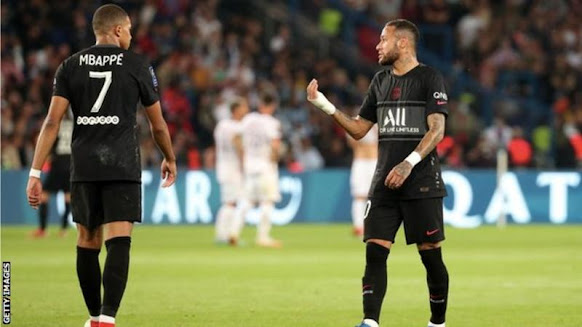 Mbappe appeared to complain to a team-mate on the bench "he doesn't give me the pass", seemingly about Neymar, after being replaced late on in Saturday's win over Montpellier.

"They are fantastic guys. These things happen," said Pochettino.

"There are always things between top players. They are competitors who want to win and help the team achieve good."

PSG host Manchester City in the Champions League on Tuesday.

Brazil's Neymar, 29, and France's Mbappe, 22, have linked up well together for PSG since joining in the summer of 2017 - for the two biggest transfer fees of all time.

"I have spoken to them individually," he said. "They may have also spoken to each other and there have been photos of them enjoying ourselves in training.

"If there is a small incident sometimes that can create a wave but it is actually just talk."

Messi, who played with Neymar at Barcelona, has failed to score in three games since joining on a free transfer.

"Of course they are all different and may need time to get to know each other and start to play naturally because, of course, PSG is always under pressure."

Pochettino says his fellow Argentine Messi will need time to adapt to France. The 34-year-old is playing for a club other than Barcelona for the first time in his professional career.

"We are talking about the best player in the world," said Pochettino.

"Let people work, let the player adapt and start to feel at home. He was at Barcelona for 20 years. It is normal that he feels at home in Barcelona.

"Now everything is new. He arrived not too long ago. Over the time we are working together he is getting to know his team-mates and, for sure, he's going to succeed. I hope he wins big things for the club. That is what we are hoping for."