Football: USA's Lloyd scores five in one of final games before retiring 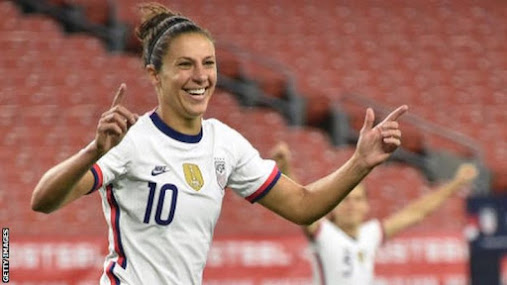 Lloyd, 39, struck twice in the opening six minutes before completing her hat-trick on 34 minutes in Cleveland.

She added two more either side of half-time in the friendly to move on to 133 international goals in her 313th cap.

The run of USA matches has been dubbed Lloyd's 'farewell tour'.

She will face Paraguay again on 22 September, before taking on South Korea in friendly matches on 22 and 27 of October.

Lloyd will conclude the domestic season with her club on 31 October and bring to an end a career that has delivered two World Cup successes and two Olympic gold medals.

Her five strikes against Paraguay equalled the record for most goals scored in a women's international for the US.

The other scorers against Paraguay were Andi Sullivan, who got two, while Lynn Williams and new Arsenal signing Tobin Heath also found the net.

The US are unbeaten in 59 matches on home soil.