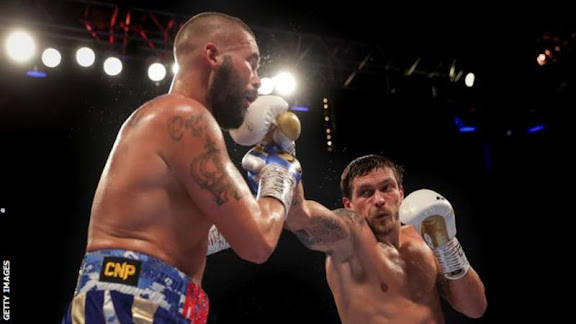 The 34-year-old Ukrainian has won all 18 professional fights, beating Tony Bellew and Derek Chisora on that run.

"He showed that in unifying the cruiserweight division in great fights and I believe he could be Joshua's toughest test to date. This is the first fight when I wouldn't be surprised if Joshua got beaten.

"Joshua has fought [Wladimir] Klitschko and been in with Joseph Parker and also been beaten [by Andy Ruiz] and the only question mark for Usyk is: Is he big enough to compete with AJ?

"If Usyk keeps a high pace and makes Joshua miss with a lot of shots, that will work to Usyk's advantage as he has probably got a better engine.

"Joshua is a phenomenal athlete with tremendous punching power and strength but has a tendency to tire out if the pace is uncomfortable for him."

Saturday's fight from Tottenham Hotspur Stadium will be broadcast on BBC Radio 5 Live with full commentary from 22:00 BST.

A crowd of more than 60,000 is expected and it will be the largest attendance Joshua has fought in front of since his win over Alexander Povetkin with 80,000 at Wembley Stadium in September 2018.

Since then, Joshua has lost to Ruiz in New York before winning the rematch in Saudi Arabia and gained a ninth-round victory over Bulgaria's Kubrat Pulev at Wembley Arena last December, with only 1,000 fans attending because of coronavirus restrictions.

Both Joshua and Usyk won gold medals at the 2012 London Olympics, at super-heavyweight and heavyweight respectively, with the Briton going on to win 24 of his 25 professional fights, including 22 inside the distance.

'Joshua can get the job done early'

Dillian Whyte, who lost to Joshua in 2015 and is pushing for a rematch with him or a shot at WBC champion Tyson Fury, believes the key to beating Usyk on Saturday is to adopt an attacking strategy.

"I think it's a great fight and Joshua will stop him in the first six or seven rounds," Whyte told the 5 Live Boxing podcast.

"Usyk will start fast and Joshua should be cagey as Usyk is a bit lighter. Joshua can sometimes lack confidence but hopefully he goes back to the old him, starts pressing, being the bigger, stronger guy and gets the job done early.

"If Joshua sets the pace, he can get an early knockout and if he is strong, confident and walks him down, then I don't see Usyk's punches troubling Joshua."

Groves, who held the WBA super-middleweight belt in 2017 and 2018, added: "If I was Joshua, I would take control of the ring and try to dominate and bully off the front foot.

"Usyk will want to be off the back foot for the first couple of rounds, then try to pepper Joshua.

"If I was in the Joshua camp, I would say: You want to keep this guy in his box. You don't want Usyk having any confidence, so hit him hard and early.

"In the first three rounds, you want to land something big on him."

Hearn said: "I'm always nervous for an Anthony Joshua fight, especially when you're fighting someone that really believes he is going to win.

"This is what we're in the game for. If we win, the celebrations will be wild; if we lose, we will be gutted.

"AJ is comfortable with what he is doing, which is important in a fight like this, and he appreciates how tough this is.

"I think AJ wins by stoppage and that could happen early. AJ has to put dents in him early on."