Manchester United through to Europa League Final despite loss to Roma 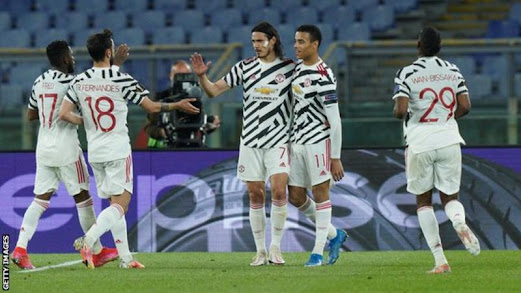 Edinson Cavani scored both United goals in the second leg of a 13-goal semi-final.

The Uruguayan opened the scoring with a fabulous first-half effort, then found the net with a fine header from Bruno Fernandes' excellent floated pass in the second half.

In between, Roma briefly threatened a comeback when former Manchester City forward Edin Dzeko scored his ninth goal against United before Bryan Cristante finished smartly with a shot on the turn.

The Italians had the final word when Nicola Zalewski's low drive went in through David de Gea's legs after taking a deflection off Alex Telles.

The 8-5 aggregate victory ends a run of four semi-final defeats for United under Solskjaer and sets up a meeting with Villarreal - who knocked out Arsenal - in Gdansk on 26 May.

United are without a trophy since their last triumph in this competition in 2017, their longest run since the five-year gap between 1985 and 1990, which was ended by an FA Cup success that marked the start of Sir Alex Ferguson's silverware collection.

Jose Mourinho was manager for that most recent United success and he will be responsible for reviving Roma's fortunes next season, knowing their only chance of European football next season will come in Uefa's new third-tier Conference competition.

If getting to within one win of a trophy as United manager was a triumph for Solskjaer, it also underlined why the Norwegian is persisting in his efforts to keep Cavani at Old Trafford.

At 19, Mason Greenwood is at the other end of the age scale to Cavani. The England man eclipsed Duncan Edwards as the youngest Englishman to reach 100 appearances for United, and the third youngest ever behind Norman Whiteside and George Best.

Evidently, Greenwood has much to learn. Cavani, 34, is the finished article.

His four goals in the tie have taken him to 14 for the season and a run of seven goals in six games suggests he is reaching top form at just the right time.

Cavani's first-half effort was stunning. Starting with Paul Pogba winning possession, United's team work was brilliant. A fantastic lay-off by Fernandes sent Fred running through midfield. The pass was good but Cavani still had work to do as he belted his shot into the Roma net.

His second was more subtle, coming from another Fernandes assist - a deep cross delivered to perfection, which invited the headed finish which effectively killed the tie.

The word is Cavani is now minded to stay at United for another season and as by far the best orthodox number nine at his disposal, Solskjaer will be delighted if those suggestions prove to be correct.

De Gea at his best

It has become a modern tradition for second-choice goalkeepers to play in cup competitions in order to keep them motivated.

That was the case at United in 2016-17, which meant Sergio Romero rather than De Gea played in the Europa League final victory over Ajax in Stockholm.

So, given De Gea has featured in all four Europa League ties since losing his Premier League spot to Dean Henderson, he must be in line for an outing in Gdansk.

Nothing happened in this game that would lead Solskjaer to conclude De Gea should not get the job.

The Spaniard was superb and without him, what appeared to be a fanciful Roma comeback might have become a reality. Right at the start, he denied Gianluca Mancini with a superb close-range save and it took another to prevent Lorenzo Pellegrini giving the hosts the advantage.

De Gea then made a series of stops in the second half which were even more important as Roma attempted to turn the tie on its head. He turned a Dzeko effort that was heading towards the top corner away from danger and then made further saves shortly afterwards from former United man Henrikh Mkhitaryan and Cristante when another Roma goal would have given them added impetus and left them only two short of their target.

The current situation of having two international keepers mixing games seems unsustainable but on this evidence, De Gea is far from past his best.

'We played one very, very good half' - reaction

Manchester United boss Ole Gunnar Solskjaer, speaking to BT Sport: "It feels good to be in the final. We played one very, very good half at Old Trafford which has taken us through. I'm disappointed we lost - especially the way we played in the second half.

"It could easily have been 8-6 to them. It was a strange game. We kept giving them the ball but luckily we have one of the the best keepers in the world. We are in the final and are looking forward to 26 May."

On United's punishing schedule over the next few days: "It's unheard of. It's made by people who have never played football at this level. It's physically impossible for the players. We have not been dealt a good hand. We are going to need everyone for these four games. It's a short turnaround but we have to be ready."

Solskjaer's first final - the best of the stats

Manchester United are next in action on Sunday when they begin a run of three Premier League games in five days at Aston Villa (14:05 BST).