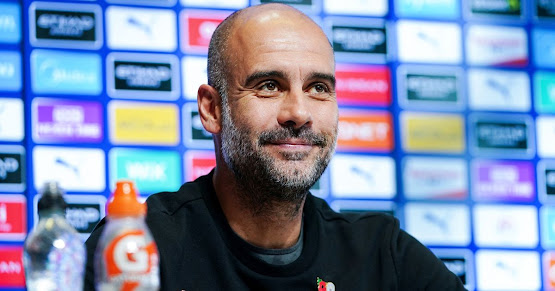 Guardiola said there has been "47% more muscular injuries" this year compared with the same stage last season.

Premier League clubs voted against continuing to permit five substitutions for the 2020-21 season in August.

The rule was brought in when the 2019-20 season restarted after lockdown in June to protect player welfare.

When asked if the Premier League should revert to allowing five substitutions instead of three, Guardiola said: "They should 100%."

City have been affected by injuries to several players this season, including Sergio Aguero, Gabriel Jesus, Benjamin Mendy and Nathan Ake.

"It is not about one club," added Guardiola.

"In the Premier League players have 47% more muscular injuries than the previous season, due to no preparation for most of the teams and the amount of games.

"All the leagues - Germany, Spain, everywhere - allow five substitutions to protect the players, not to protect one team.

"Hopefully they can reconsider and do what the rest of the world does because we have to adjust to the pandemic situation."

Fifa allowed the continued use of five substitutes in competitions this season but many Premier League members are believed to have felt it unfairly benefited major clubs.

Other Premier League managers backed Guardiola's call for the rule to be reversed.

Manchester United boss Ole Gunnar Solskjaer said: "I don't understand and cannot believe that the vote went against because we have to look after the players.

"I can see why clubs voted against but if you take a step back and think about these footballers and their mental and physical health, the only sensible solution would have been to give us the opportunity to rest a few more."

"I'm not just talking about my club, I'm talking about every player, who is asked to play day after day, putting themselves at injury risk," he said.

"We have a big squad here, but the pressure is on the players and it could certainly have a big effect this year more than any other year."

"But we are not alone, there are other teams who are finding it a struggle," he added.

The defending champions' defensive problems mounted this week after Fabinho, who had been filling in for Virgil van Dijk at centre-back, joined the Netherlands international on the sidelines.

"Then December is still December, so that means we have the intensity of the most hectic schedule already."

"After the international break we only have one game a week so it's not so bad for us," he said.

"But for teams in Europe it's really busy, and there are more injuries for that reason."

Former Arsenal and England physio Gary Lewin told BBC Radio 5 Live there are "a number of factors" behind the rise in injuries this season.

"In previous seasons players would have gone through a normal pre-season, a normal strength and conditioning programme and then had fixtures on a regular basis but not like they are now every two or three days," he said.

"If you're not fully recovered from your previous game then fatigue will set in and muscle injuries will go up, because if you have tired muscles and you load them again, they are going to break."