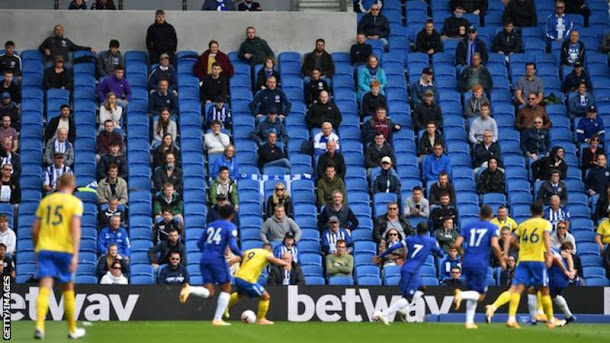 The plans were placed under review earlier this month after a rise in coronavirus cases, with pilot events restricted to 1,000 people.

The UK's Covid-19 alert level has moved to 4, meaning transmission is "high or rising exponentially".

New measures will be set out by Prime Minister Boris Johnson on Tuesday.

Speaking to BBC Breakfast, Gove confirmed plans for a staged return of fans would be "paused".

"We were looking at a staged programme of more people returning - it wasn't going to be the case that we were going to have stadiums thronged with fans," he said.

"We're looking at how we can, for the moment, pause that programme, but what we do want to do is to make sure that, as and when circumstances allow, get more people back.

"The virus is less likely to spread outdoors than indoors but again it's in the nature of major sporting events that there's a lot of mingling."

The pilot programme will also be paused.

The majority of sports in England have been played behind closed doors since the coronavirus lockdown in March, including Premier League football, the FA Cup final, England's Test cricket matches and two Formula 1 races at Silverstone.

Sport events that took place with full crowds in March shortly before all fixtures were postponed and the UK locked down have come under scrutiny.

The impact of Liverpool's Champions League fixture with Atletico Madrid on the spread of coronavirus is being investigated by the city's council, while there have also been calls for an investigation into whether the Cheltenham Festival should have gone ahead.

The government defended its decision to allow such events to proceed before restrictions on mass gatherings were introduced.

"People look back now at the beginning of the pandemic at some of the major sporting events then and ask the question why were they allowed to go ahead," added Gove.

"What we must do is look at sporting events now with caution but we also recognise that sport is a vital part of this nation and we're looking at everything we can do to support our athletes, our great clubs, through what will be a challenging time."

Julian Knight, the chair of the Digital, Culture, Media and Sport (DCMS) select committee, said "if we don't find a route map with smart solutions to allow sports and live events to gradually reopen, we risk decimation of our sporting and cultural infrastructure".

The leaders of more than 100 sports bodies have written to the prime minister to ask for emergency funding, warning of "a lost generation of activity" because of coronavirus.

Sport England has handed out £200m for emergency cases, but many in the sector believe more is needed.

Earlier this month, Premier League chief executive Richard Masters told BBC Sport it was "absolutely critical" fans were allowed back inside stadiums as soon as possible and failure to do so would cost clubs £700m during the 2020-21 season.

English Football League clubs lost £50m in gate receipts last season and estimate a £200m loss if there are no fans this season.

The Rugby Football Union is braced for a £50m loss in revenue, while the England men's squad have accepted a 25% pay cut for the next 12 months.

Rugby Football League chief executive Ralph Rimmer urged the government not to delay the return of crowds, with clubs facing a potential impact on revenues of "up to £2m per week".

At the end of August, 2,500 people watched a friendly between Brighton and Chelsea at the Seagulls' Amex Stadium - the first time fans had been allowed into a Premier League ground in almost six months.

About 300 spectators were allowed to watch last month's World Snooker Championship final between Ronnie O'Sullivan and Kyren Wilson at the Crucible Theatre in Sheffield, but original plans to admit fans for all days of the tournament were reversed.

Arsenal's 9-1 victory over West Ham in the Women's Super League on 12 September saw up to 1,000 fans attend.

More than 2,500 spectators bought tickets for the first day of the St Leger meeting at Doncaster on 9 September, the first crowd at a British horse racing fixture in six months - but the rest of the meeting was then held behind closed doors.

This is grim news for British sport, which teeters on the brink of an unprecedented crisis.

On one hand it is no surprise given rising cases of Covid-19, tighter restrictions and the criticism the government received for allowing events like the Cheltenham Festival to continue in March and not shutting down sooner.

The optics of allowing thousands of fans to travel to grounds while encouraging people to work from home was also seen as insurmountable.

But it will infuriate sports governing bodies that insist it is much safer for fans to be in highly regulated, socially-distanced often open-air venues and stadiums than watching on the TV in pubs for instance.

They are not aware of any data or research which proves the return of fans would increase transmission. And they point to the fact that countries like Germany are allowing thousands of fans back inside grounds.

Sports are now being warned to brace themselves for several months without fans and report back to DCMS officials what impact this will have on their finances.

For EFL and rugby clubs in particular, where matchday revenue is crucial, the answer will be potentially devastating. From non-league football and Olympic sports through to grassroots clubs and community leisure facilities, the sector fears an existential crisis which could cost thousands of jobs, and result in a slump in participation.

Pressure will now build on the government to come up with a similar emergency fund to the £1.57bn bail-out the arts sector was handed in the summer. Calls for the Premier League to help prop up the football pyramid will also intensify.