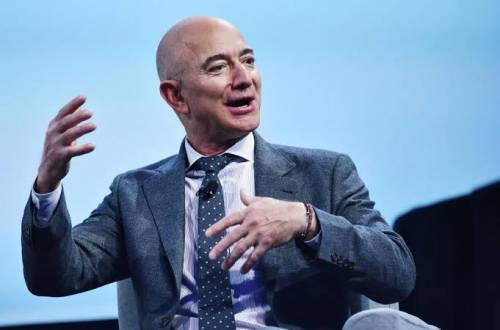 Jeff Bezos has seen his fortune grow by $6.4bn and Amazon is now worth $1.1trn after its shares hit a record high on Tuesday amid surging online orders during Coronavirus lockdown, Daily Mail UK, said.


While Amazon's founder saw his wealth rocket, his employees at many warehouses have warned their lives are at risk by continuing to go to work.
As of Tuesday afternoon, Amazon's stock was up more than four per cent closing at $2,283.32 per share.
That topped the online retail giant's previous high of $2,170.22 per share on February 19.
With stocks rocketing, Bezos, who currently owns an 11.2 per cent stake in Amazon, saw his fortune grow by $6.4bn to $138bn, according to a Forbes estimate.
The company's founder was last week named the world's richest person for the third year running despite his divorce last year, which cost him a quarter of his stake in the tech giant.
Bezos, 56 – who founded the e-commerce company out of his basement in Seattle, Washington, in 1994 – gave $36bn worth of stocks to ex, Mackenzie.
The economic damage from the Coronavirus outbreak has been widespread and severe after only a few weeks into the shutdown.
The International Monetary Fund on Tuesday warned that the world economy will suffer its worst year since the Great Depression.
But for Amazon, a surge in demand for online orders from those under lockdown, has seen its stock price rise.
Business Health News