Police, Air Force Personnel Clash In Abuja Over Violation Of Lock down Order 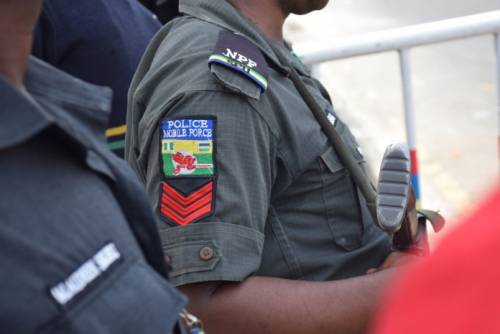 There was commotion in the Nyanya area of Abuja on Thursday as some policemen engaged a group of Air Force personnel in a faceoff.


Trouble started when two young Air Force officers drove against traffic during the ongoing lockdown of the city occasioned by the outbreak and continued spread of Coronavirus but were stopped by the monitoring team of the Federal Capital Territory administration.The enforcement team directed the two men to turn back and follow the right way but they declined.
According to an eyewitness, "The Air Force officers started insulting the police commander, Azeez Idowu."
This infuriated the policemen and other officers on the team, who made attempt to arrest the Air Force personnel.
The situation escalated when a detachment of Air Force officers arrived the scene to rescue their colleagues but were resisted.
This led to another round of shouting match, creating panic in the area.
Normalcy however, returned when a senior Air Force officer on the team asked the two men to apologise to the police commander.
News