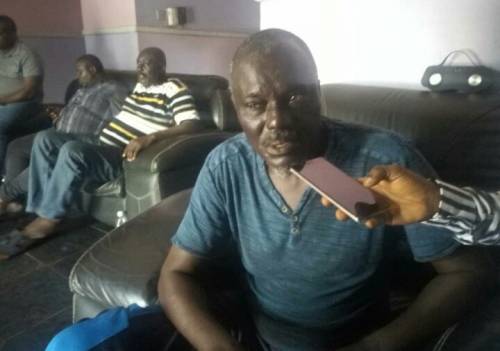 The last few days have been some of the most tormenting for Mr Monday Pessu, an elderly man residing in Ugbuwangue, Warri, Delta State.


Since the morning of April 2, 2020 when fate dealt him a terrible blow after life was snuffed out of his 28-year-old son, Joseph, by a trigger-happy army personnel identified as Sergeant Ilekura Samson Ajayi, all has not been well with Pessu.
He lost his wife in 2010 during a rerun election in Delta State after she was shot by yet-to-be identified persons while opening her shop around Bazaunu area of Warri.
He was yet to fully recover from the shock and trauma of that incident when his young son was killed. There is no word to describe his feeling at the moment.
“Life no longer has any meaning to me,” the heartbroken father told SaharaReporters on Friday at his home in Ugbuwangue.
“I am confused and don't know how to carry on with life again,” he continued as tears slowly gathered in his eyes.
“I am a widower, I lost my wife recently and now I have lost my son. Can I survive this big blow?
"On that fateful day he was killed, I was home and called him to come take me to the hospital and he told me he was coming.
"On his way from Ubeji, he was stopped at a checkpoint by the army officer that later killed him. He was interrogated by the army and my son thought his killer was done with him and drove off. The next thing my son heard was a gun shot fired at him from the back.
"The bullet hit him on the waist but my son accelerated the car to enable him get to a hospital or home to save his life but his friend that was inside the car with him at the time saw another car chasing them from behind.
"Unfortunately for my son, his car stopped when he was about to enter a street, and the army personnel jumped out from the car chasing them and immediately shot him on the chest at close range three times. My son died on the spot.

Late Joseph‘s car
“Rather than apologise for their ignoble act, the army even lied that my son was an armed robber, that his car had no number plate and was tinted.
“These are all lies to justify his killing. We want justice over his killing,” Pessu added painfully.
Waking up that fateful morning with plans lined up ahead, the late Joseph had no inkling of what laid in wait for him as he stepped out of the house to buy a few items around his neighbourhood.
Following a movement restriction put in place by the Delta State Government to curb the spread of Coronavirus in the country, most businesses were closed while only few persons could be seen on major roads.
As a result, Joseph had to drive a few metres away from his house to search for the items he needed that morning.
But in the process of doing that, tragedy struck. Sergeant Ajayi of the Nigerian Army 4 Brigade Benin, Edo State, with force number 02NA/52/3134, pumped several bullets into the young man after first questioning him at a checkpoint, sending his entire family, friends and community into mourning.
According to the victim’s wife, Bola, life will no longer be the same without her husband and father of two children around them.

"We are passing through severe pains,” she said, struggling to contain her emotions. “Our two little children, Tuoyo, four years, and Wisdom, three years old, have not gotten that real fatherly love and care before the life of their father was cut short by the soldier.

“How do I raise these two little kids without their father? All we want for my husband is justice."
During an autopsy supervised by the police and army, several bullets were extracted from Joseph’s body and it was discovered that he died as a result of the bullets that pieced through his chest.
Groups and individuals have called for the authorities to ensure justice prevails on the matter.
News