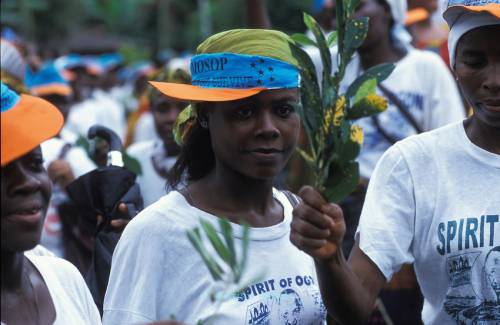 The Movement for the Survival of the Ogoni People has attributed rising tensions in Nigeria to President Muhammadu Buhari administration's handling of peaceful agitations in the country.


In a statement to commemorate Easter signed by Fegalo Nsuke, President of MOSOP, the group said the Nigerian Government appeases violent agitators but attacks all those making genuine demands for justice and equity.
Nsuke said, "Government has rewarded and encouraged violent agitations in the country through different offers to such groups, thereby increasing tension, endangering the future of the country and discouraging peaceful methods such as adopted by the Ogoni people."
Nsuke called on Nigerian leaders to make the country a home for all by advancing justice in the land both for citizens and other nationals living in the country.
Citing the case of Shell Petroleum Development Company, whose influence on the Nigerian state had allowed it violate citizens' rights in the Ogoni area with impunity, Nsuke said Shell must be held accountable for its crimes against the Ogoni people especially for aiding the murder of over 4,000 Ogonis between 1993 to date.
Speaking on his recent illegal detention, which involved huge bribes paid to the Nigeria Police, Nsuke said injustice had heightened uncertainties in the country and it was unfortunate that even the police whose responsibility was to protect citizens had been turned into agents of repression.
The MOSOP leader regretted that the only focus of government in Ogoni had been the resumption of oil production in the area without first committing itself to a peaceful resolution of the concerns raised by the people.
This, according to him, was in violation of the people's rights to peacefully inhabit their land and a strategy to prosecute the genocidal agenda initiated by Shell against the Ogoni people.
He added, "The Nigerian Government and Shell know that forceful oil resumption in Ogoni will be resisted by the people and in their usual response what they will do is to draft in soldiers who kill the protesters.
“That should be avoided as we do not want any more deaths for oil in Ogoni.”
Nsuke called for a change from such repressive approach and a move towards peaceful dialogue to resolve the conflicts.
News