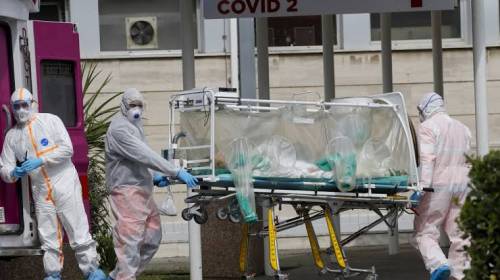 Germany has announced its highest daily death toll from Coronavirus as 285 fatalities were recorded in the last 24 hours.


The 285 new deaths – surpassing the previous record of 266 last Friday – bring the total from 2,969 to 3,254, an increase of 9.6 per cent, according to Daily Mail UK.
The spike in deaths comes despite a slowing infection rate, which has prompted scientific advisers to call for a re-opening of schools 'as soon as possible'.
Experts warn that the time lag between infection and death means a country's death figures may continue to worsen even once the number of cases slows down.
In addition, many countries have had inflated figures at the start of the week because of a weekend backlog, a problem which may have been exacerbated by the long Easter weekend.
The number of new infections today was 2,486, higher than yesterday's 2,082 but still the second-lowest figure since March 22.
The 2.0 per cent increase in cases brings the overall tally from 125,098 to 127,584.
Germany also has a keen eye on the rate of contagion, known as R, which shows how quickly the virus is spreading.
The rate is currently around 1.2, meaning that each person with the virus infects another 1.2 people on average.
Angela Merkel is due to meet the leaders of Germany's 16 states on Wednesday to discuss a possible way out of the lockdown.
In recommendations sent to Merkel, an influential group of academics called for schools to re-open 'as soon as possible'.
Health