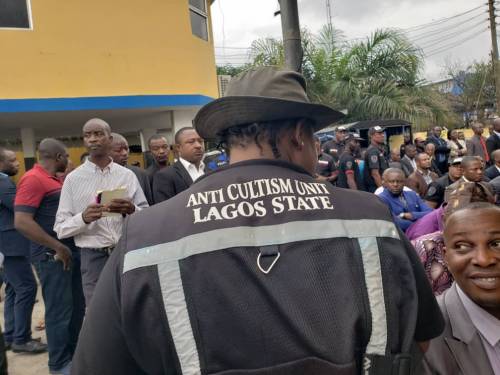 The Lagos State Commissioner of Police, Hakeem Odumosu, has suspended the operation of the Lagos State Anti-Cultism Unit “until further notice”.


This was following an investigation into the conduct of the operatives in the unit by our correspondent.
The first part of the investigation revealed how hapless Nigerians, who are sometimes illegally arrested, are perpetually detained and their family members extorted by the notorious policemen at the unit.
In response to the investigation that was published across platforms on March 5, spokesperson for the Lagos State Police Command, Bala Elkana, added that the indicted officers have also been posted out of the unit while being investigated.
Three policemen were captured extorting huge sums as bail fee from detainees' relatives during the undercover investigation.
A senior police officer indicted in the investigation, Supro Jimoh also known as Babalawo, kept one Nurudeen Usman, a victim of illegal raiding, in detention for nine days until his family members were able to raise N70,000 as bail fee.
In another instance, two other policemen, Saudi and Abdul, were captured collecting N10,000 as balance of an illegal bail fee extorted from another family.
Elkana said the indicted officers are being investigated.
When asked if the outcome of the investigation would be made public, Elkana said the public will be updated on the findings of the inquiry.
Speaking on the dedication of the police to rid the law enforcement agency of unprofessional officers, Elkana said more than 10 policemen were investigated for various misconducts last year and are currently serving punishment in various prisons in the country.
He added that some more are having their time in court to be tried according to the law for their offences.
“Last year alone, about 54 officers got various degrees of punishment. The only difference is that we don’t go public with those things. The officers know that if they are caught they will be dealt with.”
News