Coco Gauff knocked out of Australian Open by Sofia Kenin 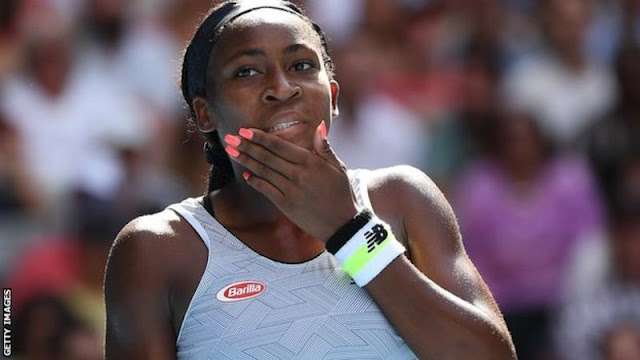 
Kenin will next face Tunisia's Ons Jabeur, who beat Serena Williams' conqueror Wang Qiang in straight sets.
After a warm embrace at the net, Kenin and Gauff broke out in tears following an intense battle on Melbourne Arena.
Kenin, 21, dropped her racquet and cupped her face with both hands after taking her second match point to reach her first Grand Slam quarter-final.
"I was just fighting," Kenin said. "She played some good points at crucial moments but I just had to calm down and relax."
An emotional Gauff received a standing ovation as she walked off the court, understandably disappointed at the manner of her defeat but with the likelihood of much better moments ahead of her.
"I'm doing well right now at 15. I still have so much I feel like I can get better on," said Gauff, who will rise into the world's top 50 for the first time next week.
"I don't even think this is close to a peak for me, even though I'm doing well right now."

Gauff falters as errors creep in

Gauff has become a global star in less than a year, announcing her arrival with a victory over seven-time Grand Slam singles champion Venus Williams at Wimbledon before 'Cocomania' surrounded her run to the last 16.
The hype returned at Melbourne Park after the Florida teenager, who turns 16 in March, produced an assured performance to knock out defending champion Naomi Osaka in the third round.
That was as much down to Osaka's implosion as it was Gauff's brilliance, however.
Against the streetwise Kenin, the question was always going to be whether she could soak up her opponent's relentless returning and then play aggressively to ask questions of her own.
After a slow start where she lost the opening two games, Gauff rediscovered the things which have marked her out a potential great - hard-hitting from the baseline, fizzing angled winners and fleet of foot around the court - to break back for 4-4.
Gauff missed a set point on Kenin's serve at 6-5 before the older American produced two double faults as Gauff eventually took the tie-break with her fourth set point.
Momentum swung back in Kenin's direction early in the second set.
Gauff's tendency to cough up double faults appeared again, three contributing heavily to Kenin breaking serve in the fourth game and pinching the advantage.
That proved pivotal as Gauff, with errors now starting to creep in, was unable to claw the break back.
In similar fashion to the opening set, the teenager started the decider slowly but this time could not recover like she did in the opening set.
The winners began to dry up for Gauff, allowing Kenin to dominate the rallies and breeze through the decider in 33 minutes.
"She definitely put a lot of balls in the court. She's quick. Also her drop-shots were good," said Gauff, who won just 15 points in the final set.
"I think I made a lot of errors too."
Gauff has admitted she struggled to cope with the intense scrutiny at the US Open a few months ago, culminating in an error-strewn performance against Japan's two-time Grand Slam champion Osaka.
When the pair met again on Friday, Gauff responded with an assured performance.
Asked what she has learned from her first experience in the senior competition at Melbourne Park, she said: "I'm most proud of how I handled it on the court.
"I guess what surprised me is how calm I was going into all these matches. I wasn't really nervous.
"I'm happy that I'm not letting the moment seem too big than what it is."

Former Australian Open semi-finalist Chanda Rubin on Radio 5 Live Sports Extra
Gauff came through the first set in flying colours. When the pressure was on she played some of her best tennis.
But Kenin, she's a tough competitor, and it was always going to be a challenge for Gauff to maintain that high level.
It was a bit surprising that Gauff started missing - the forehand went off and she struggled getting her rhythm back. Kenin was too solid and I think some of the nerves, the tension, the desire to get through that match got to Gauff.
It's been the most incredible, impressing thing about Gauff - we forget sometimes that she's 15 and she's handling these moments incredibly well. You still need experience to get through those deep, tough matches against players who understand how to play their game in the big moments.
Nobody likes losing a 6-0 set but I think in the end there are many positives Gauff can take from this and she's just got to keep building. Gauff wants to be the greatest - and that takes time. She's focusing on the right things with the help of the parents and her team.
It's her mental fortitude, the way she competes - how calm, how much poise she has in the big moments, and against the top players, from Venus [Williams] at Wimbledon to Naomi here, she just manages to find a high level through all that pressure. That's something that can take years to learn. It's something that's come at such a young age - and that's so impressive.
Sports