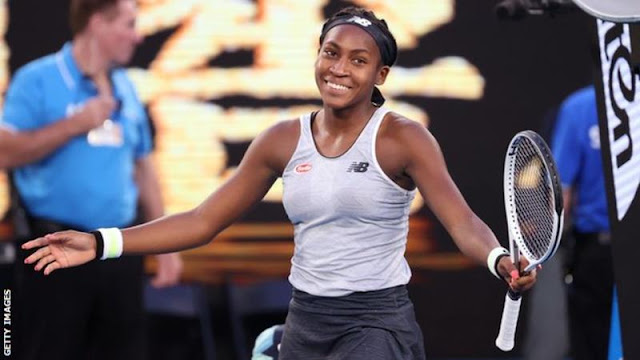 The 15-year-old excelled at the Rod Laver Arena and eased to a 6-3 6-4 victory in 67 minutes
Osaka, the world number four, struggled with unforced errors throughout - making 30 compared to Gauff's 17.


"I don't know where that came from," the American said after the match. "Honestly, like, what is my life?"
"Two years ago I lost in the first round in juniors and now I'm here," Gauff added.
"I was telling myself one point at a time and keep fighting. You never know what happens on this court."
Gauff will play either China's Zhang Shaui or American Sofia Kenin in the fourth round.
It was an uncharacteristically slow start for Japan's Osaka who had won the pair's only previous meeting at last year's US Open.
The 22-year-old could not contain Gauff in the first set, especially when the American was on serve. Gauff completed 81% of her first serves compared to Osaka's 61%.
Despite Gauff making the quicker start, the pair each held serve until the ninth game when the American seized her opportunity.
An easy backhand miss from Osaka gave Gauff break point and it was another backhand error that gave the American the break which she held on to to take the first set 6-3.
The 15-year-old broke the Osaka serve again at the start of the second set, but could not hold for 2-0, allowing the defending champion to break back.
But unforced errors continued to flow from the Japanese player and Gauff broke again to lead 4-3.
She served for the match and Osaka sent three straight returns long before hitting match point into the net, handing Gauff victory in the simplest of fashions.

I don't have the champion mentality yet - Osaka

Osaka is set to drop to ninth in the world after the defeat and could fall out of the top 10, depending on the progress of other players.
Gauff, who becomes the first 15-year-old to reach the last 16 of two Grand Slams since Martina Hingis in 1996, is set to break into the world's top 50 with her first win against a top-five player.
"I don't have the champion mentality yet. That is someone who can win when they are down," Osaka said.
"Sometimes I get overwhelmed and I don't know what to do in these situations.
"I have an age problem - I don't like losing to people younger than me. So I took this very personally."
Sports