Australian Open: Maria Sharapova set to drop out of top 350 after defeat 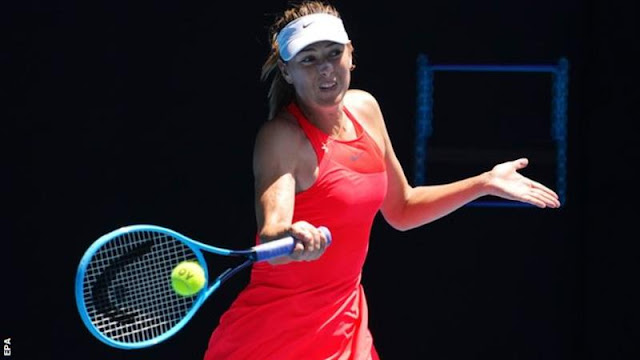 
It was only the Russian's second competitive outing since September's US Open because of a shoulder injury.
Asked whether this might be her last appearance at the tournament, she said: "I don't know. I don't know."
The 32-year-old, who was given a wildcard, added: "I was fortunate to get myself to be here and thanks to [the organisers for] allowing me to be part of this event.
"It's tough for me to tell what's going to happen in 12 months' time."
This was the former world number one's earliest exit at the Australian Open since 2010 and she has now gone out in the first round in her past three Grand Slams.
"I put myself out there. As tough as it was, I finished the match and it wasn't the way that I wanted," she said.

Halep, Pliskova, Muguruza through to round two

Wimbledon champion Simona Halep had to save three set points in the first set but eventually came through 7-6 (7-5) 6-1 against American Jennifer Brady.
Romanian Halep, who had her right wrist strapped after a fall in the first set, raced through the second set in 27 minutes after the opener took 69 minutes.
World number two Karolina Pliskova raced through the first set before having to work hard in the second as she beat Kristina Mladenovic to reach the second round.
The Czech took the opener in just 25 minutes on her way to a 6-1 7-5 win.
It was a tricky draw for the second seed, with Mladenovic a former top-10 player who helped France win the Fed Cup in November.
Pliskova is unbeaten in 2020, winning the Brisbane International this month.
"We had some good matches in the past and it was tough mentally in the second set," said Pliskova, who had shared a 2-2 record against Mladenovic before this match.
In the next round, the 27-year-old will play German world number 72 Laura Siegemund.
Pliskova, chasing a first Grand Slam title, is joined in the second round by Swiss sixth seed Belinda Bencic, Dutch ninth seed Kiki Bertens, American 10th seed Madison Keys and Greek 22nd seed Maria Sakkari, but British 12th seed Johanna Konta was knocked out.
Two-time Grand Slam champion Garbine Muguruza fought back from a dreadful first set to beat American Shelby Rogers 0-6 6-1 6-0.
American 26th seed Danielle Collins, a surprise semi-finalist in Melbourne last year, overcame Vitalia Diatchenko 6-1 3-6 6-4.
Czech 15th seed Marketa Vondrousova, a finalist at last year's French Open, lost 6-2 4-6 6-4 to Russian 34-year-old Svetlana Kuznetsova.
Catherine Bellis, playing at her first Grand Slam in two years, breezed past Germany's Tatjana Maria 6-0 6-2.
American Bellis, who has fallen to 600 in the rankings, was told she may have to quit tennis after struggling with wrist and elbow injuries.
She had four surgeries in 2018 on her wrist, arm and elbow and only returned to the WTA Tour in November 2019.
Sports