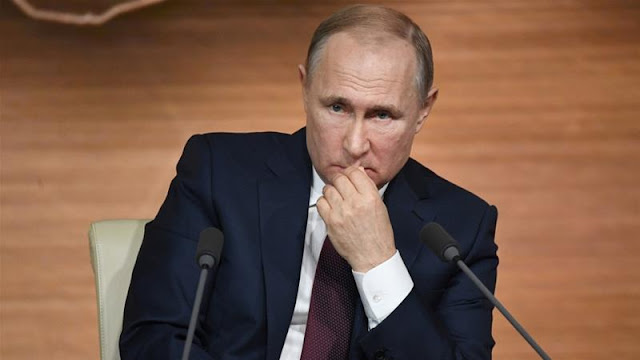 
Here are some of the highlights so far of his comments to reporters:
On US President Donald Trump's impeachment:
"The party that lost the [2016] election is continuing the fight by other means.
"[The impeachment bill] still needs to go through the Senate where Republicans, as far as I know, have a majority. It's unlikely they will want to remove from power a representative of their party based on what are, in my opinion, completely fabricated reasons.
"The Democrats accused Trump of a plot with Russia, and then it emerged that there was no kind of plot. It could not be the basis of an impeachment.
"Then they thought up some kind of pressure on Ukraine."
On climate change:
"Nobody knows the origins of global climate change.
"We know that in the history of our Earth there have been periods of warming and cooling and it could depend on processes in the universe.
"A small angle in the axis in the rotation of the Earth or its orbit around the Sun could push the planet into serious climate changes.
"[We] must undertake maximum efforts to ensure that the climate does not change dramatically.
"For our country, this process is very serious," he said. "We will undertake efforts to minimise the consequences for our country."
On UK Prime Mininster Boris Johnson's recent election victory:
"Johnson can be congratulated. He was victorious after all and had a better sense of the British public's mood than his political opponents. And as far as I understand, he intends to implement all of his Brexit plans."
On the Libyan conflict:"Russia is in touch with [Libyan Prime Minister Fayez] al-Serraj and with [eastern Libyan commander Khalifa] Haftar. We are also constantly maintaining dialogue with our partners, including Turkey, Europe and other countries.
"In our opinion, the best outcome would be for an agreement to be reached between the two conflicting sides that would lead to an end to military actions, and would establish who will rule the country, how, and what responsibilities they would have."
On Ukraine peace talks:
"There is nothing other than the Minsk [peace] Agreements. I was of course concerned by [Ukrainian President] Zelenskiyy's statement ... that they could be revised. If a revision of the Minsk Agreements starts, then the situation could enter a complete dead end.
"Direct dialogue on Donbass is needed. It is lacking."
On Russia's doping scandal:
"Any punishment should be individual. If someone is guilty of something specific, then that is completely natural and just.
"If [World Anti-Doping Agency] WADA does not have any claims against our national Olympic Committee, then our team should be allowed to participate under its own flag. Deal with specific people.
"We are doing everything to make sure Russian sport is clean."
On gas talks with Ukraine:
"This is a very difficult, sensitive topic. We would like to solve this problem.
"We will look for a solution that is acceptable for all parties, including Ukraine. That's despite the construction of infrastructure such as Nord Stream-1, Nord Stream-2, Turk Stream. We will preserve gas transit through Ukraine.
"We have no desire to exacerbate the situation in the energy sector or use this to influence the situation in Ukraine itself."
On changing Russian presidential term limits:
"One thing that could be changed about these [presidential] terms is removing the clause about 'successive' [terms]. Your humble servant served two terms consecutively, then left his post, but with the constitutional right to return to the post of president again, because these two terms were not successive. [This clause] troubles some of our political analysts and public figures. Well, maybe it could be removed."
On extending the new START arms control treaty:
"We are ready until the end of the year to extend the existing agreement, the new START treaty.
"Now if we were to receive a letter tomorrow - we are ready to sign it and send it back to Washington.
"But thus far there has been no answer to any of our suggestions. And without a new START treaty, there is nothing to curb an arms race. And that, in my opinion, is bad."
Politics