Trader Sues Saraki and Atiku For Portraying Her In Campaign Poster 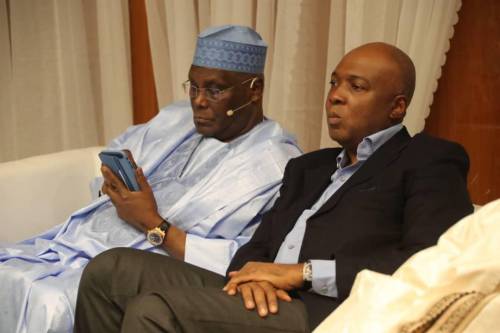 Amuda Adeleke, a trader in Victoria Island, Lagos, has sued Bukola Saraki, a former Senate President, who was also Director-General of the Atiku Abubakar Campaign Organisation for the 2019 general election, for portraying her in a poster as poor.


Adeleke also joined in the suit Abukabar, his running mate, Peter Obi and the Peoples Democratic Party.
She said her picture was taken without her consent and put to pubic use where she was portrayed like she was deprived and less privileged.
The suit, which was filed before the Federal High Court in Ikoyi, Lagos, is praying the court to award N45m damages to the plaintiff for the unauthorised and unlawful use of her photographs.
She explained through the court papers that Saraki and his campaign crew had come to Victoria Island during the election to canvass for votes, adding that she was not aware that the photographs taken would become a part of PDP’s campaign souvenir
She said she was shocked when she started receiving phone calls from relatives and friends, who had seen the campaign billboards on which her photo was displayed.
However, Saraki and the other respondent sdenied that they had any contact with the woman.
The respondents argued that their campaign materials were managed by a third party, and that the company sought her consent and interviewed her before using her pictures.
They also claimed she was paid before her photographs were used.
The court has now adjourned the case to January 2020 for the continuation of hearing.
The respondents said she had given her name as Tope Olukolu.
Politics