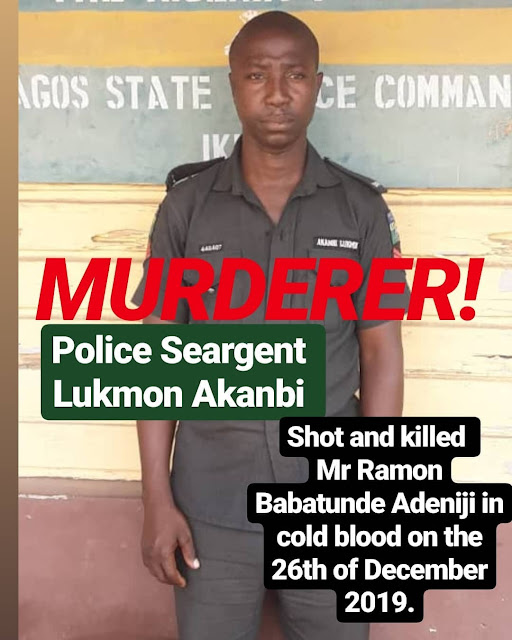 A Lagos State Police officer, Lukmon Akanbi, who shot a man identified as Ramon Babatunde Adeniyi at Ahmadu Bello Way in Victoria Island, has been arrested.


The late victim was shot while returning from Wizkid’s “Starboy Fest”. He was later confirmed dead after being rushed to Naval Dockyard Hospital.
Wizkid was furious about the incident, and took to Twitter to address the issue, pointing out that the victim will get justice. 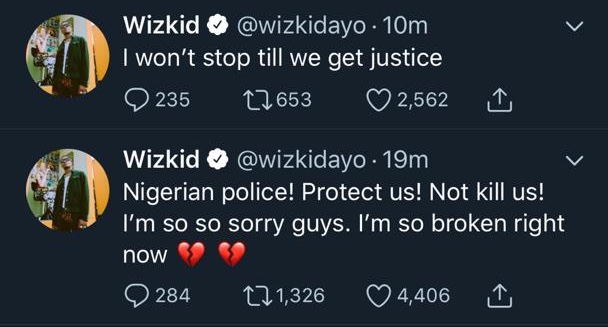 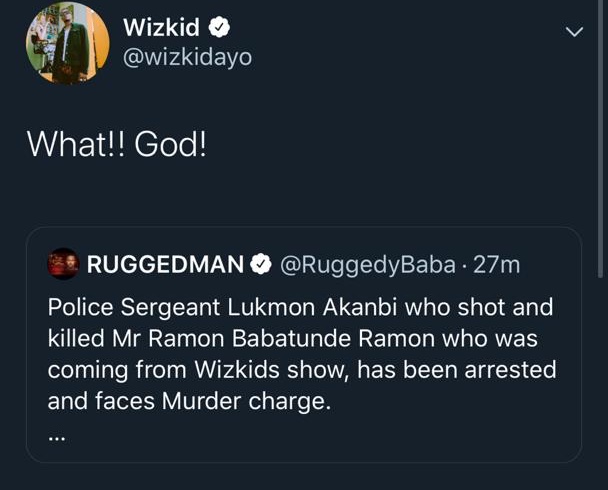 Lukmon has been arrested for murder and detained at the Provost Department, Command Headquarters in Ikeja.
He was awarded punishment of dismissal from the Nigerian Police before being handed over to the State Criminal Investigation Department, Yaba, for prosecution in conventional Court.
A statement released by the Lagos State Police Spokesperson, Elkana Bala reads
The Commissioner of Police Lagos State, CP Hakeem Odumosu, psc has ordered the arrest of F/No 448407 Sgt Lukmon Akanbi attached to Victoria Island Police Station over the shooting of one Ramon Babatunde Adeniyi ‘m’ 39 years old of campus area Lagos island.
The incident happened on 27/12/2019 at about 0420 around Eko Atlantic Victoria Island, Lagos.
There was a fracas between the Police Officer who was on patrol at the area and the victim who was returning from an event.
The Police Officer was said to have pulled the trigger of his pistol on the unarmed civilian, which fall short of professional standards on the use of Firearms.
The victim was rushed to Naval Dockyard Hospital and was confirmed dead by the doctor on duty. The Police Sergeant was arrested and detained at the Provost Department, Command Headquarters, Ikeja.
He was subjected to internal disciplinary proceedings known as Orderly Room Trials.
He was arraigned before the Adjudicating Officer on three counts charge of Discreditable Conduct contrary to Paragraph E (3) First Schedule, Unlawful and Unnecessary Exercise of Authority contrary to Paragraph Q (2), and Damage to Articles contrary to Paragraph D (1), Police Act and Regulations, Cap 370 LFN 1990.
The Sergeant was found guilty of all the charges and awarded punishment of dismissal from the Nigeria Police. He is handed over to the State Criminal Investigation Department, Yaba for prosecution in conventional Court.
The Command condemned the unprofessional conduct of the dismissed Sergeant.
The Commissioner of Police condoles with family and friends of the deceased person and assured them that Justice will prevail. Supervisory Officers of erring Policemen will henceforth be held vicariously liable for the misconduct of their men.
This is part of the measures put in place by the no nonsense Commissioner of Police to curb incidents of professional misconduct and engendered accountability in the system.
The CP avowed that no case of professional misconduct, human rights violations and abuse of powers by Police Officers will be tolerated.
Entertainment