Native doctor butchers lover, sells parts to herbalists and clerics for N1000 each

A herbalist who allegedly killed his lover Abosede Iyada, and sold her body parts to herbalists, Muslim clerics and pastors for ritual at the rate of N1000 per part has been arrested by operatives of the Inspector-General of Police Special Intelligence Response Team (IRT).

13 suspects linked to butchering and selling of the victim’s body parts were arrested in different parts of the state, as it was further learnt that many are still at large.

The prime suspect said to be a native doctor at Ifo area was identified as Segun Olaniyi a.k.a “Agba Isegun", and he was arrested after parents of the girl who vanished after visiting him lodged a complaint at the IRT office, Ogun State Annex.

Upon being arrested, Olaniyi admitted that the girl visited him on November 15 but he and his friends, Fagbon and AY who were desperately in need of money abducted and took her to a secluded area where they butchered her and sold her body parts to interested buyers within Ogun and Lagos states.

Recounting how the incident occurred, a source said;

“Abosede and the prime suspect were secondary school lovers. They later parted ways and married other spouses. We understand that Abosede had been having series of problems with her husband, who is a commercial motorcycle rider. Somehow, she reconnected with Olaniyi, who is now an herbalist. This reconnection with Olaniyi came after 15 years apart. Olaniyi, the herbalist was perceived as being rich. He used to give the deceased N2000 every day. She soon started going to visit him and soon, both of them started sleeping together. She would tell her husband that she was going to work, she would go to the suspect’s place.
“She had earlier told the suspect to help her to become wealthy. So on that fateful day she came, Olaniyi told her to go to the stream with his two friends to strip and bath her hair. She went with them; they held her down inside the stream and stabbed her to death. They then brought her out and deboned her before selling her flesh for N1000. One of the herbalists arrested told us that Olaniyi uses charm placed on his tongue to speak to the victim, which made her to obey and do whatever he asked her to do.”

IRT Operatives recovered burnt substances said to be remains of the deceased. Some of the substances were in powdery and liquid forms. 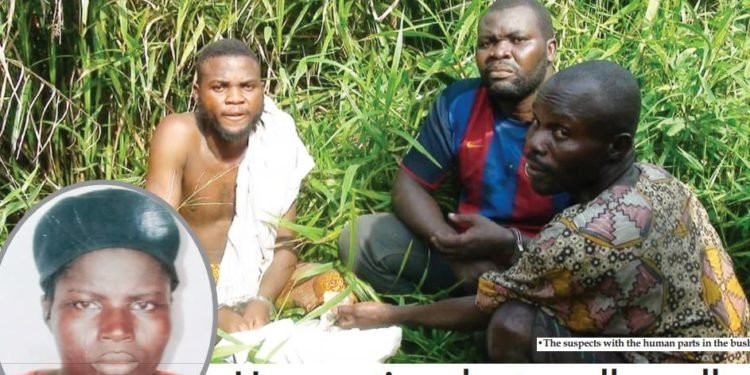 Confessing to the crime, Olaniyi said;

“She called me on the phone that she was coming to see me. I asked her the reason for her visit and she said she wanted financial assistance to boost her business.
“I called Akanbi who is my helping hand and told him to come around because someone would be visiting us. Already, we had a work at hand, so Akanbi suggested that we use her for the work.
“We killed her beside my house. I took the head, two hands and part of the meat. I sold the head to Africa for N40, 000. I sold one of the hands to an orthodox doctor named Murideen for N15,000 and the other  hand to Tonight for N15,000. I sold the flesh to one Alfa named Sunday Akinyemi (N10,000), Rasaq (N5,000) and Mustafa (N5,000).
“It was Ajibola that introduced Mustapha Iliya to me.?“I used part of the flesh to do powdered medicine which if taken with hot drink would draw customers.
“At times, we kill the husbands of some of our customers to turn them into widows so that they would join us in bringing victims to be slaughtered.”

In his own testimony, Akanbi said;

“I am from Iwugo village in Ogun State. I am married with two kids. I was a welder before I became a babalawo (herbalist). I used to assist Segun. If he wanted to buy kola or kill a goat, I would be the one to do it.
“Segun gave me N200 to buy food for the victim and he put he put sleeping medicine in the food. Ayo and I killed her in the stream.”

One of the suspects, Pastor Adewole said;

“I am a pastor.  I perform miracle with human flesh. I bought part of the flesh worth of N5,000. We also give it raw to some customers to chew and wash down with hot drink.”