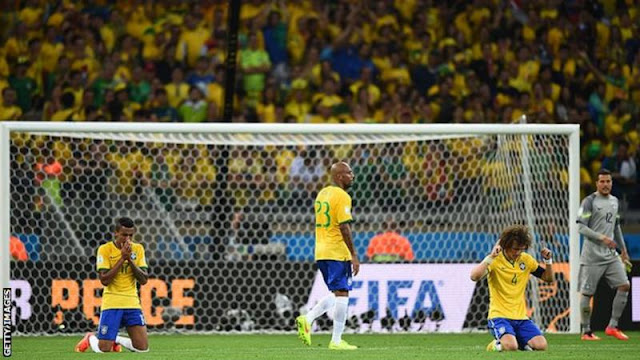 Despite all their success, Brazil had never fully recovered from the loss to Uruguay in their own iconic Maracana Stadium in Rio de Janeiro in the 1950 final.


With the tournament's return, this was the summer when football was going to dance to the samba beat with a sixth World Cup triumph - but, significantly, this one would be won in front of Brazil's own fans in their own football temple. It really was coming home.
Instead, on a balmy July night in Belo Horizonte, the city built on hills, a drama unfolded that will never be forgotten by anyone who witnessed it, whether in the sprawling Estadio Mineirao or among the millions watching elsewhere in the vast country.
And for this observer, if there is one occasion to take away and keep forever, it is the night Germany inflicted a 7-1 World Cup semi-final humiliation on the hosts, their first competitive home defeat in 39 years.
No-one saw defeat on such a scale. Every Brazilian you met felt coach Luiz Felipe Scolari, who led the nation to World Cup glory in 2002, and his team were guided by destiny.
How wrong they were.
Each minute of that day recalls a vivid memory, from watching every morning television programme covering every cough from the Brazil camp, presenters even bedecked in David Luiz wigs.
The kick-off may have been in the evening but even the journey to the stadium, made hours before, saw streets crammed with supporters gathering to witness what they believed would be a Brazil victory.
And then there was the emotion. Lots of it. Too much of it, you now reflect, and Brazil's players and fans were unable to even think straight.
So much of it centred around the absence of Neymar, Brazil's superstar and poster boy for the whole showpiece, who had been left injured and in tears after being roughed up by Colombia in the quarter-finals.
Brazil bought into the sorrowful story of Neymar's absence, and there were more tears around the stadium as their team arrived.
Scolari led his men off the coach wearing a white "Forca Neymar" baseball cap. Goalkeeper Cesar and captain for the night Luiz held up his number 10 shirt during a stadium-shaking version of Brazil's national anthem.
It was moving but instantly aroused suspicions among those of us inside the cauldron as impartial witnesses. It was just, well, a bit too much.
Germany, a very talented Germany, were impassive, controlled. Brazil looked out of control even before kick-off.
And then the nightmare unfolded.
Germany did not look like scoring every time they attacked. They actually did score every time they attacked.
Brazil were 5-0 down after only 29 minutes and the outpouring of raw emotion from this nation, with football as one of its shining symbol, is another everlasting memory.
As the goals went in, each one greeted with increasing disbelief, the tears flowed again. Hundreds of men and women inside the Estadio Mineirao were overcome by the nature of the embarrassment they were seeing. They were crying. Fans held each other in comfort and consolation.
It bordered on the surreal. The pain of defeat, and this kind of defeat, was too much.
For the last 15 minutes of the first half, periods of strange silence descended on the stadium after the cacophony of the build-up.
Brutal reality was dawning. Brazil were 5-0 down at home in a World Cup semi-final.
There had been a lingering suspicion throughout the tournament that Scolari's defence was suspect - and, robbed of suspended captain Thiago Silva, so it proved.
It was then, as the second half started, that emotion was overtaken by raw anger and the Brazil team became the target.
Ironically, in a reference to previous World Cup triumphs, Brazil's team bus had been decorated with the slogan: "Brace yourself - the sixth is coming."
It certainly was - but not the sixth they had planned for as Andre Schurrle added to the pain. Germany effectively declared at 7-0, some of their players later admitting they started to sub-consciously take it easy.
Oscar made it 7-1 in stoppage time, but by then the Brazil supporters were cheering Germany's goals and passing movements, whistling at their own team's. Striker Fred was viciously abused.
As the stunned fans streamed out into the Belo Horizonte streets, anger was heavy in the air. The odd flag was burned and any television camera lurking nearby quickly had Brazil fans bellowing into it demanding heads roll and inquests be held.
In a packed, steamy media room, the man who had known the greatest glory was now trying to explain away the most painful defeat.
Scolari was softly spoken, apologetic and treated with a sympathy from Brazilian journalists that surprised many. On what he described as "the worst day", he was perhaps spared because he had credit in the bank from 2002.
The usually animated features were downcast as Scolari admitted he would be remembered as much for this defeat as his World Cup win.
For those of us there to witness, describe, and recount events, there was a mixture of excitement and disbelief that we had been present at something so emotion-charged and seismic in a nation's consciousness.
It was a painful privilege.
It was, quite simply, the sporting experience of a lifetime. The location, the game, the result - we may never see another match like it.
Sports