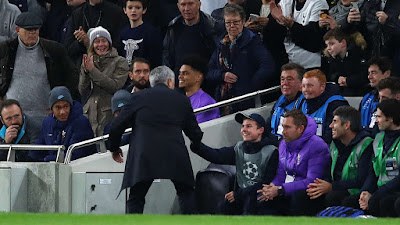 Tottenham ball boy Callum Hynes admits he still can't believe what happened on Tuesday night as he played his part in the club's 4-2 Champions League win against Olympiacos.


With Spurs trailling 2-1 early in the first half, Callum was able to quickly hand Serge Aurier a ball on the sidelines with Jose Mourinho's side benefiting from the resulting quick throw-in to score via Harry Kane.
The quick thinking from Callum didn't go unnoticed by the new Tottenham manager, who congratulated the 15-year-old ball boy following the goal and paid tribute to him post-match.
For Callum, who is now into his sixth season as a ball boy, his big moment is still something he's struggling to wrap his head around.
“It’s all a bit surreal,” he told Tottenham's website. “I was just doing my job and I still can’t quite believe what happened.
“I didn’t even see the goal! I was busy getting the ball that had come off and then I heard the cheer. I turned around and Harry was celebrating.
“I looked at the replay on the screen and watched exactly what happened. You can see from my smile it was just unbelievable. Jose didn’t have to do that. It was really nice of him to come over to me. It’s made my day, my life, really! I love Spurs and it was an amazing moment I’ll never forget.
“The whole way home I was using a torch in the car to go over my maths revision!”
Callum's mother Keeley has also been blown away by the reaction to her son's actions and stressed he's always embraced being able to learn from the sidelines.
“We were in the stadium and saw Jose go over to Callum," she said. "We just thought it was going to be a high five and didn’t expect any more than that but then both of our phones started pinging!
“The smile on Callum’s face! It was such a lovely thing that Jose did to say thanks like that. Callum always says that by sitting on the touchline watching these players he learns so much and takes it all away with him for his own football. I’m so proud of him.”
Article continues below
Mourinho was also a ball boy growing up and sees similarities between Callum and himself.
“To do that you have to be a very good ball boy. I was, between 10 and 15, 16 years old, a very good ballboy," Mourinho said.
"He is a very good ball boy, understands the game, reads the game."
Sports