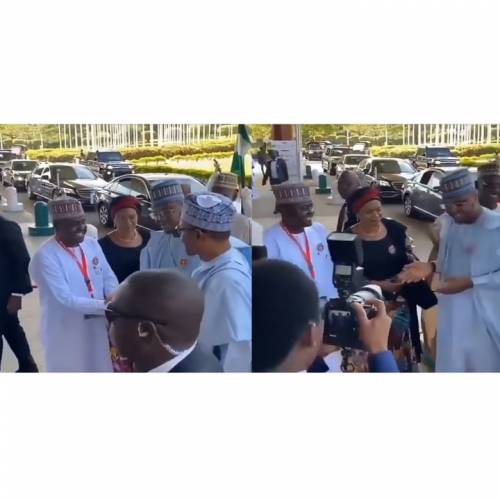 
In an 18-second clip that went viral on the social media, Buhari could be seen coming down from a car and ignoring Tinubu’s effort to greet him.
Some Nigerians on Twitter blamed the Northern tradition of men not shaking women in public, while others claimed PMB did not want to have any conversation with person’s from Bola Tinubu’s camp.
A Twitter user @zubyrega911 said, “The man simply doesn’t trust anything or person from Jagaban’s lineage!
"After all, he shook hands with PM of Germany and many other female leaders!
"The South will soon understand what they did to themselves.”
@Naija_Ijebu took the comment to another level by saying, “I know say @realFFK for hug the mama.
"This man should not be running the affairs of Nigeria.
"I still remember Obasanjo helping Iweala with her gele (head gear).”
@marvixnaija, defending PMB, said Remi Tinubu was not deserving of any greeting.
He said, “The lady didnt act like she was deserving of shaking the "almighty" President even though she is a ranking senator.
"I am ashamed of the senator representing me at the Senate.”
As for @segjoh, it was the Islamic card PMB played in refusing to acknowledge Tinubu’s gesture.
He said, “Really disturbing. Honestly, all I see is the religion card.
"See how uztaz @DrIsaPantami blocked her like Sergio Ramos.
"This won't have been the case if she was a Christian."
PMB was attending an award and exhibition in Abuja when the controversial incident happened.
Politics