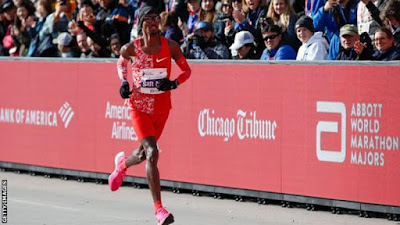 
"Next year, I'm going to be back on the track and I'm going to give it a go in the 10,000m," he said on social media.
"Hopefully I haven't lost my speed but I will train hard for it and see what I can do. I'm really excited."
Farah, who is also a six-time world champion and has yet to run the marathon at a major championship, hinted earlier in the year that he could make the switch because he "missed" the frequency that track racing provided.
He finished eighth in the Chicago Marathon in October, having won it in 2018 in only his third race.
Farah, who will still need to qualify for the Tokyo Games, added: "It's been really exciting competing in the marathon over the last couple of years.
"To win the Chicago Marathon was nice and to finish third in the London Marathon was OK, and it's been a great learning curve for me."
Farah's track return also comes at a time when he has faced questions about his association with former coach Alberto Salazar, who has been banned for four years for doping violations.
Speaking before the Chicago Marathon, Farah said he had "not done anything wrong" and said there was an "agenda" against him.
Sports