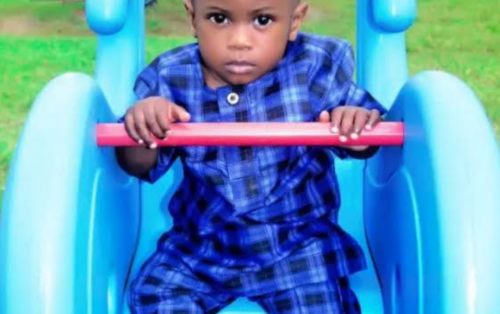 Modupe Kolawole, the mother of a one-year-old boy, Eniola, declared missing at a popular church in Akure, Ondo State, has accused the 'prophet' of the church of using armed policemen to harass her family.

Little Eniola Gold Kolawole was last Sunday said to have disappeared at the Sotitobire Miracle Centre in Akure, during a special service at the church.
SaharaReporters had reported that the church, located at the Oshinle Quarters of Akure, was founded by Prophet Babatunde Omoemi.
Eniola was dropped at the creche section by his mother during the Sunday service but was declared missing shortly before the end of the programme.
Mrs. Kolawole told SaharaReporters on Friday that the workers of the church had been harassing her family for asking questions about the whereabouts of their son.
The distraught woman said Omoemi did not assist in searching for the missing child.
According to her, her mother-in-law, Kemisola Kolawole, was on Tuesday arrested and detained by the police anti-kidnapping squad.

"The police are not helping over this case at all. A toddler found at the roadblock area in Akure on Wednesday is not my child. They have not seen my baby.
"It's unfortunate that the police that supposed to be protecting the citizens are the ones being used to harass and intimidate us.
"My mother-in-law has been detained since Tuesday. They did not allow us to see her since then.
"The sad aspect of it is that no worker has been arrested in the church by the police since my child got missing in the place.
"Although, we have contacted our lawyer and he would write a petition to the commissioner of police to intervene over this issue of my stolen child."
But police said it had begun its investigation into the disappearance of the boy on the church premises.
The spokesman for the police in the state, Femi Joseph, said detectives from the state command would rescue the toddler alive.
Joseph explained that there was no formal report of the incident from any quarters, based on the understanding between the parents of the abducted boy and the church leadership.
He stated that some leaders of the church came to report at the police station when the father of the missing boy, Temitope Kolawole, allegedly hired some youths to protest at the church.
Joseph added the church leadership also alleged that the boys were about setting the church ablaze when policemen arrived at the scene on Thursday.
"The boy will surely be rescued but I want to appeal to the parents of the missing boy and their relatives not to take law into their hands," he said.
Meanwhile, the man whose church is at the heart of the matter, Omoemi, has refused to comment on the incident.
He did not respond to telephone calls made to his line. He also did not reply to a text message sent to him.
News