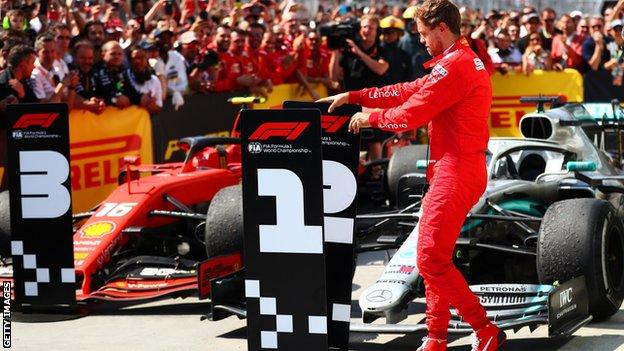 Another season, another trophy in the cabinet for Lewis Hamilton. By winning his sixth world title, the 34-year-old became statistically the second most successful driver in F1, behind only Michael Schumacher.


But while Mercedes were busy hoovering up points for both the drivers' and constructors' titles, the rest of the season's entertainment was happening elsewhere - and it often involved Sebastian Vettel.
Even if 2019 brought him only one race win and one pole position, he got top marks for turning what could have been a tedious year of racing into a thriller. Here's why..

The one when Seb lost it

As the pressure was mounting on the four-time world champion to stop the run of mistakes that had begun in the second half of 2018, team-mate Charles Leclerc was taking most of the points - and all of the glory.
But then, in Canada in June, Vettel came back with a bang to dominate qualifying and secure his first pole in nearly a year - since the previous July's German Grand Prix.
Had Vettel's losing curse been lifted? It seemed as if the F1 circus was rooting for him to win in Montreal.
But then Hamilton applied pressure while chasing him down, and the mistakes returned. The German went off on to the grass approaching a chicane, then returned to the track aggressively enough to push Hamilton towards the wall. That caused the stewards to pick up their clipboards and issue him with a five-second penalty.
Cue Vettel shouting: "Where the hell else was I supposed to go? I had grass on my wheels. They are stealing the race from us."
That wasn't the end of it. Vettel took the chequered flag, but once he discovered he wasn't the race winner, he went into another rant.
"No, no, no," he said over team radio. "Not like that. You have to be an absolute blind man - you go on the grass, how are you supposed to control your car? This is the wrong world."
The German's outrage caused him to disrupt the usual podium celebrations, park his car by the FIA officials instead of in front of the 'number two' board in parc ferme, and storm off into the Ferrari garage. He was then forced by an FIA official to fulfil his podium duties.
On the way, he swapped the 'number one' board in front of Hamilton's car for the 'number two' where his should have been. A bemused Hamilton, who must have felt for his rival, dragged him up to share the top step of the podium - once Vettel had finally arrived.
Unsportsmanlike behaviour? Not a bit of it... fans enjoyed it so much Vettel was voted driver of the day. And Ferrari even joined in with the refusal to accept defeat, upholding their long tradition of flying a flag at the factory in Maranello following a race win.

Another driver quite happy to dispute the stats this year is Max Verstappen. The loss of his pole position in Mexico in October was not the first time he's been stripped of a top-three place because of a penalty, but it is the one he appears to refuse to accept.
He was handed a three-place grid penalty after failing to slow under yellow flags on his final qualifying lap when Valtteri Bottas crashed, and even admitted his mistake in the post-qualifying news conference with a nervous giggle.
Then again, his eight career victories have nearly all come amid some form of drama. Take the one in Austria in June - Verstappen's first win of the year and his second at the team's home race.
The Mercedes pair were out of contention for the win with engine cooling issues, and so a rivalry blossomed between Verstappen and Charles Leclerc. A gripping on-track battle saw Verstappen chase down the Ferrari and pass with just two laps remaining.
Just as Hamilton had done to Vettel in Canada three weeks earlier, Verstappen forced a mistake and made Leclerc run wide. At least, that's one way of looking at it. Another, if you're in the Ferrari camp, is that Leclerc was pushed clean off the track.
There was a long wait to discover if Verstappen would keep his race win. The verdict - that his victory stood - was not called until hours afterwards. The Dutchman called it "hard racing".

Ferrari came back with bite at the British Grand Prix. Verstappen and Leclerc faced off in one of the most intense battles of the modern F1 age.
It even extended to the pits as they stopped for new tyres. The race to get back on track as quickly as possible meant a side-by-side duel that the Silverstone pit lane just wasn't designed for.
They battled hard but fairly, and Leclerc held off Verstappen until a safety car on lap 20 ended their fight.
Enter Vettel to take up the challenge. But instead of taking the fight to Verstappen, he piled into him. The German put himself to the back of the field, and left the Red Bull driver to trail home in fifth.
Vettel not only collected a 10-second penalty, but also another two superlicence points to add to those from the 2018 US Grand Prix, and the Canadian Grand Prix after the "grass on my wheels" incident. They wouldn't be the last.

There are many rules for a Ferrari driver. But number one, at the front of the rule book in giant font, is: 'Don't mess up in front of the Tifosi.' Leclerc adhered to it. Vettel didn't.
Leclerc produced the perfect pole-to-flag victory in September - with a controversially cut corner and an aggressive defensive move thrown in for good measure. He did all that at an F1 circuit steeped in history, fending off Hamilton to become the first Ferrari winner at Monza since Fernando Alonso in 2010. Scenes.
But what of Vettel? Ah, well. First, he lost a place on lap one to the Renault of Nico Hulkenberg. Then it got worse.
Under no pressure from anybody, the German lost control and spun at the Ascari chicane. Then it got worse still.
Attempting to re-join the track, Vettel did something to horrify Ferrari fans and driving instructors alike. Mirror, signal, manoeuvre? Forget it. Seemingly without looking, Vettel returned to the track and crashed into Lance Stroll, who then had to swerve dangerously to avoid a collision with Pierre Gasly.
It was a shocking move to come from a driver so experienced, and another jaw-dropping moment in an already dramatic race.
Then it got even worse.
The stewards slapped Vettel with a 10-second stop-go penalty, and added three more points to his over-crowded superlicence. Three more after that would mean a ban.
So was that the end of Vettel's dramas for the season?
Don't be silly.

Ferrari implode, and the others get a go on the podium

The internal power struggle to be number one at Ferrari reached breaking point at the Brazilian Grand Prix in November, with a crash and a double retirement.
Leclerc had been beating Vettel repeatedly on and off the track all season - even when the pair played with remote control cars in the paddock.
In the closing stages of the battle for third at Interlagos, Leclerc made a clean lunge down the inside of his team-mate at Turn One.
Vettel wasn't happy. He really wasn't happy. He responded by deploying DRS to attack back on the approach to Turn Four.
The duo went wheel-to-wheel down the straight, As Vettel was pulling away, he turned in on Leclerc and the cars made contact. The result: suspension damage for Leclerc, and race-ending punctures all round.
The feud had finally erupted - and history had repeated. The move emulated one Vettel had made on Mark Webber at the 2010 Turkish Grand Prix in their Red Bull days.
It was heartbreaking for Ferrari, but a joy to see two midfield teams - Toro Rosso and McLaren - make it on the podium. It was a particularly sweet moment for Red Bull's most recent reject, as he won a drag race with Hamilton on the final straight across the line. For this was Pierre Gasly's moment.
Gasly - demoted from Red Bull to Toro Rosso in August - and Carlos Sainz joined Max Verstappen on the podium to celebrate a race which won't be forgotten any time soon.
Report

The one where Mercedes made a mess of things

What happens when it pours down during a race, and cars come a cropper on a corner covered - inexplicably - with soap?
If you're Vettel, you deliver the perfect race - for once - by coming from last to second, while much of the field crashes or retires.
Such was the strange scenario in Germany in July, one made even odder by a rare Mercedes foul-up. The team arrived wearing 1900s-style outfits to celebrate 125 years in motorsport. They left having been sucked into enacting a full-on tribute to Wacky Races.
To think, after a disappointing French Grand Prix the previous month, that the F1 community had debated whether the sport was getting stale. Germany provided a race for the ages - and a few surprises.
Take, for instance, the drivers to spin off. Bottas - sure. Hulkenberg - understandable. Leclerc - a bit of a shock. But Hamilton? The multiple world champion came to grief at a corner covered, by the looks of it, in soap suds. Had Dick Dastardly paid a secret visit to Hockenheim? No one seemed able to explain - or take any action.
You wouldn't get that kind of drama in a game of Mario Kart.
However, the most shocking moment of the race was when Racing Point took a gamble on slick tyres in the closing stages as the rain subsided, and Lance Stroll took the lead.
All bets were off on who would eventually stand on the podium, and to add to his list of dramatic victories, Verstappen won, with another display of masterful driving. Daniil Kvyat collected some champagne on the third step next to Vettel.

The one with the bromance

Away from Vettel's antics, there are many things to be taken from 2019.
There's the bromance between Lando Norris and Carlos Sainz; the close midfield battle and resurgence of McLaren; the fall of Renault's performance; the ladder Williams and Haas continue to climb towards achieving competitive form; the Red Bull mid-season driver swaps leading to the discovery that their talent pool is dry; and the continuous discussions about the 2021 regulations.
But what is for certain, is that Formula 1 in 2019 has provided moments of laughter, tears, frustration, boredom and disbelief. And long may it continue. See you in Melbourne in March, Sebastian?
Sports