England in New Zealand: Hosts on top in second Test 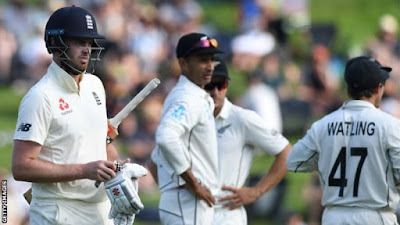 
Dom Sibley and Joe Denly both made four as England reached 39-2 - trailing by 336 - in the 18 overs possible before the close.
New Zealand lead 1-0 in the two-Test series.
Sibley, in his second Test, was hit on the helmet by a Tim Southee bouncer before he was trapped lbw playing across the line to a delivery that would have cannoned into leg stump.
Matt Henry dismissed Denly as he induced a thick outside edge, with wicketkeeper Watling taking a good, low catch diving to his right.
Rory Burns, dropped on 10 and 19, will resume on 24 and captain Joe Root six not out.
Play will start half an hour early at 21:30 GMT for the remainder of the Test, to make up for time lost to rain on Friday.

Having won the toss, Root will be hugely disappointed that England were not able to bowl New Zealand out for less.
While the bowling was fairly tidy and they restricted the run-rate well for the majority of day two - the Kiwis only added 86 to their overnight 173-3 in the first 44 overs - the tourists went long periods when they rarely threatened.
They started excellently as Latham was bowled by Broad leaving the ninth ball of the day. Sam Curran then had Henry Nicholls caught at fine leg hooking seven overs later as England got the early wickets they needed.
However, the tourists, who spent 201 overs in the field in the first Test, then went 53 overs - including 36 with the second new ball - without taking a wicket before Broad had Watling caught at gully on the stroke of tea courtesy of a lifter.
Broad, who was given two warnings for running on the pitch, had the superb Mitchell caught at fine leg before Southee gloved an excellent Chris Woakes delivery behind.
Jofra Archer and Curran finished the innings off as England took the final five wickets for 60 runs.
There were times when it looked like England needed a spin option to offer variation, with the decision to leave out a frontline spinner yet to be fully vindicated as the pitch and conditions offered their five-man seam attack little.
One positive for England was the fitness of Ben Stokes. The all-rounder struggled with his left knee in his two overs on day one, but he bowled 11 overs with much more freedom on Saturday.

Mitchell and Watling show the way


After New Zealand's shaky start to the day, Watling and Test debutant Mitchell shared 124 for the sixth wicket.
The partnership was built on patience and was again a lesson for an England side looking to adapt the way they bat in Test cricket.
All-rounder Mitchell was initially cautious before growing into his maiden Test innings. He played the short ball particularly well during his four-hour stay at the crease.
Having grown up in Perth in Australia, 28-year-old Mitchell will be used to handling short-pitched bowling and he played numerous crunching pulls. England kept on feeding the shot despite a lack of pace in their attack and Mitchell's obvious ability off the back foot.
The tactic eventually worked, but ultimately it was a poor shot from Mitchell rather than a good piece of bowling that proved his undoing.
Fresh off the back of his 205 in the first Test, Watling was again a thorn in England's side. The wicketkeeper played each delivery on its merit, left the short ball well and scored frequently behind square on the off side.
It was almost a surprise when he fell, although, in mopping up the tail in quick time, England's bowlers exposed their top order to Southee and Henry.

'Our opportunity is there to win this Test' - what they said

England bowler Stuart Broad on BBC Test Match Special: "We're pretty happy - 375, in England if you win the toss and bowl, you'd be disappointed, but in this part of the world you have to manage your expectations.
"Our opportunity is there in this game. If you're a batsman, you'd fancy your chances tomorrow, getting through that first hour and going on.
"That's our way to win this Test - bat once and go past them. The next three days will be the best time to bat on this pitch and we need to make the most of that."
New Zealand all-rounder Daryl Mitchell: "To be able to put on the black cap was pretty special. You are not human if you are not nervous. It was nice to get some runs.
"Being sent in on this pitch, if you said we would make 370 we would probably have taken it. Getting two poles tonight is a massive bonus. Hopefully we can build some pressure in the morning, maybe get a couple of quick ones and really put some heat on them."
Ex-England batsman Mark Ramprakash: "New Zealand will be very happy. Their bowlers exerted the pressure and asked the England batsmen questions.
"The batsmen are having to cope with the physicality of being tired and lots of overs in the field, and then the mentality to come with their game plan."
England and Middlesex bowler Steven Finn: "The bowlers stuck to their task pretty well. They copped a little bit of criticism in the last Test for chasing the game.
"They were patient and when they needed to change their plans, they did. They may rue a couple of missed opportunities yesterday."
Sports