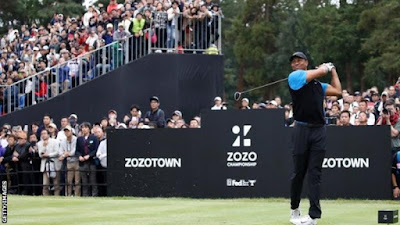 The 15-time major champion finished the day on 18 under par after playing for 10 hours, completing his third round and 11 holes of the fourth.


Play was postponed on Friday because of rain and will conclude on Monday.
Northern Ireland's Rory McIlroy moved into fifth place.
Woods, making his first appearance since knee surgery in August, extended his lead over Hideki Matsuyama having started the day two shots ahead.
He did not get off to the best start on Sunday in the third round, three-putting at the first, but he went on to card six birdies to stay in front.
Following the third round, all players then began their final rounds immediately in a bid to catch up on lost time because of Friday's play being postponed.
Woods played until the 11th hole when play had to be abandoned due to poor light.
"I played all right," said Woods. "I made a few mistakes here and there. Pretty pleased with most of the day and I made birdies when I had opportunities."
Asked about matching Sam Snead's record of 82 PGA Tour wins, Woods added: "I'm trying to win, no doubt about that."
McIlroy had a nightmare 72 on the first day but a 65 on Saturday was followed by a superb 63 in the third round, equalling the low round of the week, including six birdies and an eagle at the 18th. In the fourth round he completed 16 holes, finishing the day on 11 under par, seven shots behind Woods.
Round two had to be held over to Saturday when six inches of rain fell, and the PGA then said fans could not attend Saturday's play because of "safety concerns".
It is the first PGA tournament to be staged in Japan.
Sports