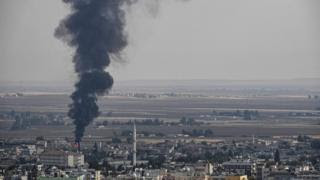 
On Wednesday the president called the Turkey-Syria border situation "strategically brilliant" for the US.
Sporadic fighting continues in the region despite a US-brokered pause.
Under the deal, Turkey agreed to halt its operation for five days while Kurdish fighters left the area. Turkish forces first launched their assault after Mr Trump withdrew all US troops from the border.
President Recep Tayyip Erdogan's operation aims to push Kurdish fighters - regarded by Turkey as terrorists - away from northernmost Syria and create a "safe zone" for resettling up to two million Syrian refugees currently in Turkey.
Between 160,000 and 300,000 people have reportedly fled their homes since the fighting started, and there are fears that the Turkish operation may lead to the ethnic cleansing of the local Kurdish population.
Concern was also growing about possible war crimes committed by Turkey and allied militias since the offensive began on 9 October. Unconfirmed reports suggest that Turkish forces have used white phosphorus, a chemical weapon, in Syria.

What did Mitch McConnell say?

In his opinion piece in the Washington Post, Mr McConnell - as Senate majority leader one of the most senior members of Mr Trump's Republican party - attacked the US troop withdrawal as a "grave strategic mistake".
"The combination of a US pullback and the escalating Turkish-Kurdish hostilities is creating a strategic nightmare for our country," he wrote. Even if the ceasefire held, the Turkish assault and US withdrawal had "set back" Washington's fight against the Islamic State (IS) group.
Mr McConnell says the US "retreat" will allow both Russian and Iranian influence to grow in the region.
The Kentucky senator suggests using "both sticks and carrots to bring Turkey back in line while respecting its own legitimate security concerns", as well as maintaining a "limited military presence" in Syria and work closely with allies in the Middle East "threatened by this chaos".
Mr McConnell did not mention Donald Trump by name in the article.
On Wednesday, President Trump called the situation in the region "strategically brilliant" for the US.
"They have a problem at a border," he told reporters at the White House. "It's not our border. We shouldn't be losing lives over it."
Mr McConnell is the latest Republican to criticise the president over Syria. Senator Lindsey Graham - normally a staunch ally of Mr Trump's - has vociferously opposed the administration's troop withdrawal.
"A buffer zone is acceptable to the Kurds but a military occupation that displaces hundreds of thousands is not a safe zone," Mr Graham said on Thursday after speaking to Kurdish forces. "It is ethnic cleansing."

What's happening on the ground?

Mustafa Bali, a spokesman for the Kurdish-led Syrian Democratic Forces (SDF), tweeted on Friday morning that Turkey was breaking the ceasefire near the flashpoint border town of Ras al-Ain.
"Despite the agreement to halt the fighting, air and artillery attacks continue to target the positions of fighters, civilian settlements and the hospital," he wrote.
President Erdogan dismissed reports of continuing clashes on Friday as "misinformation" but international news media recorded explosions in Ras al-Ain during the morning.
The Kurds had agreed to cease firing in the area between Ras al-Ain and Tal Abyad, where combat had been fierce, but they said other areas had not been discussed.
The Turkish-declared pause followed talks in Ankara between Mr Erdogan and Mr Trump's Vice-President, Mike Pence, on Thursday.
All fighting was to halt for five days, or 120 hours, and the US was to help facilitate the withdrawal of Kurdish-led troops from Turkey's "safe zone" along the border.
Mr Erdogan said on Friday that Syrian Kurdish fighters had begun to withdraw but Turkish forces would stay in north-eastern Turkey to make sure they "truly leave".
The Turkish president also told reporters that his forces would restart their assault "the minute 120 hours are over" if Kurdish fighters have not left the area by the end of the ceasefire.

Nearly 500 people have been killed since the offensive started, according to the Syrian Observatory for Human Rights (SOHR), a UK-based monitoring group.
They included 224 members of the Kurdish-led Syrian Democratic Forces (SDF) and 183 Turkish-backed rebels, but also 72 civilians, according to the SOHR. The dead reportedly included at least 20 Turkish civilians.
Reports in some newspapers alleged that Turkish forces used white phosphorus in Syria. People exposed to the chemical are badly burned, as moisture on the body makes the chemical burn more vigorously while the heavy smoke it emits damages the lungs.
Turkey insisted it did not have the weapon in its arsenal, but some Kurds forces accused militias fighting alongside Turkish forces of deploying it.
A spokesman for the Organisation for the Prohibition of Chemical Weapons (OPCW) said on Friday the group had "not yet determined the credibility of these allegations", but was aware of the situation and collecting information.
Amnesty International says it has gathered "damning evidence of war crimes and other violations by Turkish forces and their allies".
It accuses them of carrying out summary executions and attacking civilians indiscriminately.
Hevrin Khalaf, a Kurdish female politician killed on 12 October, was dragged out of her car, beaten and shot dead by Turkish-backed Syrian fighters, Amnesty says.
In other attacks, children were killed by Turkish air strikes or mortars, Amnesty says.
Turkish-backed fighters have denied responsibility for Khalaf's death. President Erdogan insists his operation is aimed at bringing peace to the region and should be welcomed internationally.
News