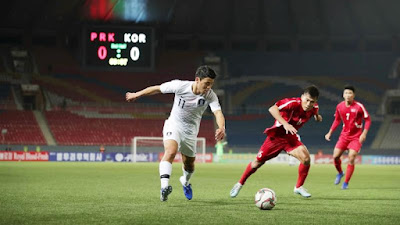 The South Korean football association (KFA) has sought action against North Korea for blocking fans and media from attending a FIFA World Cup qualifier between the countries at an empty stadium in Pyongyang.


The Seoul-based KFA's letter to the Asian Football Confederation (AFC) argues that the North failed to uphold rules requiring host nations to grant visas and entries for travelling supporters and media without discrimination, its official Shin Jung-hoon said.
Upon their return, South Korean players said the North Korean players were unnecessarily physical and verbally abusive during the match.The game, which was cast into media darkness because the North refused a live broadcast from Kim Il Sung Stadium, ended in a stalemate.
"[The letter] expressed regret over North Korea's failure to separate sports and politics and said its actions over the match should be reviewed for discipline," Shin said. "We also called for AFC efforts to ensure something like this doesn't happen again."
North Korea in recent months has suspended virtually all cooperation with the South amid deadlocked nuclear negotiations with the United States, and ignored the South's calls for discussions on media coverage and allowing South Korean fans to attend ahead of Tuesday's game.

South Korean Unification Minister Kim Yeon-chul, Seoul's point man on North Korea, told legislators on Thursday that the way the North handled the game was "very disappointing" and reflected the standstill in inter-Korean relations.
During qualifying for the 2010 World Cup, North Korea chose to host games against South Korea in Shanghai, refusing to hoist the South Korean flag and play the South Korean anthem on its soil.
The fate of the game in Pyongyang was uncertain until last month when the AFC informed the KFA that the North decided it would host its Group H match against the South as scheduled.
Sports