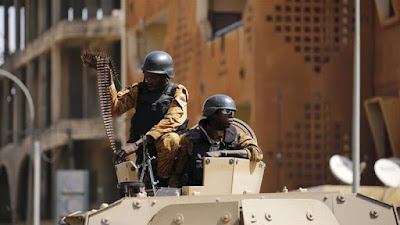 Four soldiers and a police officer have been killed in twin attacks which also left 11 soldiers wounded early on Saturday in the north of Burkina Faso, the army has said in a statement.


"Military units in Bahn (Loroum province) and Yense (Yatenga province) were targeted by almost simultaneous terrorist attacks" about 3am (03:00 GMT), the statement said.
"These attacks unfortunately cost the lives of five personnel in the units, including one police officer. Eleven soldiers were also injured," the statement added.
The army said the security forces had successfully fought off the assailants before the arrival of reinforcements.
Until 2015, the poor West African country was largely spared violence that hit Mali and then Niger, its neighbours to the north.
But attackers - some linked to al-Qaeda, others to the Islamic State of Iraq and the Levant (ISIL or ISIS) group - started infiltrating the north, then the east and then endangered the southern and western borders of the landlocked country.
Combining hit-and-run tactics with road mines and suicide bombings, the insurgents have killed nearly 600 people, according to a toll compiled by AFP news agency.
Civil society groups put the number at more than 1,000, with attacks now taking place on an almost daily basis.
Burkina's defence and security forces are badly equipped, poorly trained and have shown themselves to be unable to put a halt to the increasing violence.
France has a force of 200 in Burkina Faso but also intervenes frequently as part of its regional Barkhane operation.
News