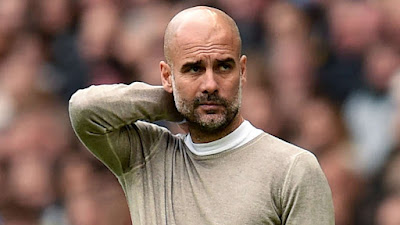 “The day I see the light go out in my players’ eyes, I’ll know it’s time to go.”
That’s what Pep Guardiola said when he decided to call time on his incredible reign at Barcelona in 2012, according to Marti Perarnau’s book 'Pep Confidential'.


After a disappointing fourth year at the Camp Nou - disappointing in that he only won a Copa del Rey, finished second in La Liga and reached a Champions League semi-final - Guardiola decided he had run out of energy and ideas.
Watching him looking pensive in training ahead of Manchester City’s Premier League clash with Crystal Palace and receiving an encouraging hug from assistant coach Rodolfo Borrell, you could be forgiven for thinking that something similar was happening again.
Eight points behind leaders Liverpool and with two defeats in eight Premier League games - to Norwich and Wolves, teams that have spent the early parts of the season in the bottom half of the table - City are not the same awesome, wrecking machine that has amassed the two greatest points totals in English football history.
His side came back from seven points behind last season but Guardiola admits that doesn’t mean it is going to happen again.
“I don’t believe in these kind of things - it happened last season, [therefore] it's going to happen this season,” he said ahead of the trip to Palace.

“What I believe is playing better and better and better. The reason why we didn't play quite good against Wolves in some moments, that is only my worry.
“This week I looked at what we have done, what is my feeling about the team, what is my feeling about the way we’ve played against this system and the other ones, what we have to do. I'm only concerned about that.
“I don’t anticipate my future - I'm going to lose this game or win. You don't live if you think about that. Sport is present, stay in the present and prepare.”
Ahead of this season, Guardiola was concerned about keeping things fresh in his fourth campaign with City.
His side were pushed hard in the last two intense campaigns - particularly the last one featuring an extraordinary battle with Liverpool when neither faltered in the run-in and City triumphed by a point.
At Barcelona, he went into a fourth season on the back of three titles and two Champions Leagues but the Catalans' points total would drop from 99 and 96 to 91 as he missed out on a league win for the only time during his four years in charge.
But the biggest difference between his final season in Spain and this one in Manchester was the chaotic backdrop. Guardiola was facing an acrimonious rivalry with Real Madrid’s Jose Mourinho that became so toxic it poisoned El Clasico encounters.
Now, Mourinho is long gone from United and Guardiola’s relationship with main rival Jurgen Klopp is far more friendly and respectful.
There was also a power battle off the field among Barcelona's presidency whereas City is possibly the most settled club on the planet. This time, the problems have been more on-field than off.
City have had a particularly bad run of injuries.​ Aymeric Laporte, now the senior player at the heart of the defence following the exit of captain Vincent Kompany, has been ruled out until the new year with a knee injury.
His strength and composure have been missed and that has been compounded by the loss of fellow centre-back John Stones with muscle injuries.
Leroy Sane was already ruled out for six months with a cruciate knee ligament injury while Benjamin Mendy’s return from a similar problem is being taken cautiously.

But it’s difficult to get away from the fact that City haven’t been playing well on the pitch.
The decision not to replace Kompany has proved to be a mistake with City’s defence less than secure. And it’s had the knock-on effect of moving Fernandinho out of his influential role as a holding midfielder with the relatively raw Rodri forced to play there every week as he acclimatises to English football.
However, there is no reason why Guardiola can’t turn things around.
His side remain full of desire to succeed in Europe, having never gone beyond the quarter-finals of the Champions League under the Catalan. And with the aforementioned injured players coming back in time for the knockout stages, there will be plenty of excitement in the new year.
Liverpool’s perfect form won’t last all season but City must stay within touching distance. A tough trip to Selhurst Park after the international break is about as difficult a game as they could face to test their title credentials.
“We have 50 games in all competitions,” Guardiola said. “We have to play to enjoy, have fun and we will see. I’m not the guy who thinks he’s going to win all titles we are going to play and all the Premier Leagues for the rest of my life.”
After Saturday, we’ll get a better idea of whether it’s fourth-season syndrome or just an unusual start for an unusually brilliant team.
Sports