‘Many trapped’ as petrol-laden truck explodes near Onitsha market 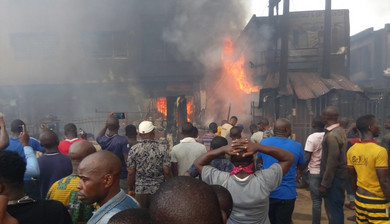 A resident said a petrol-laden truck, which lost control, exploded after ramming into some buildings in the Upper Iweka axis of the city.


The incident sparked confusion among residents and traders at nearby Ochanga market.
Over 100 shops were reportedly razed goods such as clothing and electronics affected as well.
“Many buildings are on fire and the firefighters are nowhere to be found,” a resident told TheCable.
Another resident said some of the traders at the market were unable to immediately escape from the scene, leading to injuries.
He said the fire spread quickly as a result of the flammable goods being sold in the area.
“Most of the goods there are foot wears. So, when the tanker fell, it was easy to spread among the road and across shops. A shop belonging to one of my friends was completely razed.”
In a video of the tragic incident sent to TheCable, at least four houses were seen on fire.
The fire had not been put out as of the time of filing this report.
News