'I've slept with Ronaldo more times than my wife!' 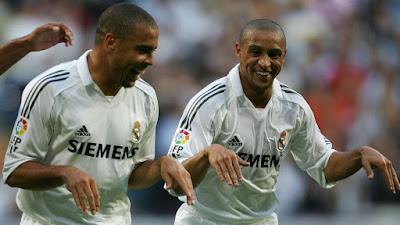 Former Brazil defender Roberto Carlos has lifted the lid on his time at Real Madrid.


The full-back, famed for his rocket of a left foot from dead ball situations, was a key member of Real’s ‘Galactico’ sides, and he admitted that the players may have wielded too much power at the club in that era.
Carlos has fond memories of a “crazy” time, especially that spent with a friend from their early days back home in Brazil.
“I met Ronaldo in 1993 and from that moment we always shared a room,” he told Portuguese television, as quoted by AS. “I’ve slept more times with Ronaldo than my wife!
“Today when I’m looking back I think; how is it possible that we got away with so much craziness?
“After every game it was private jets left, right and centre. We’d meet at the private terminal at  [Madrid airport] Barajas and [David] Beckham would be off god knows where, [Luis] Figo and [Zinedine] Zidane would be off somewhere or other, Ronaldo and me…and we had to train the day after tomorrow.
“I used to pray for Saturday fixtures so I could go to the Formula 1 on Sunday. It was private jets all over the place. It was crazy.”
The antics may have been fun for the players, who were a close-knit group, but some managers' attempts to wrest control of the dressing room spelled the end of their time in Madrid.
“During the Galácticos era there were seven of us… it created a dangerous situation in the dressing room.
“We always managed the situation well, we got along well, but [Jose Antonio] Camacho didn’t and he only lasted 10 days.
“He came into the dressing room, said hello to everybody and was very serious, a man with a lot of history at Real Madrid.
“Then he said: ‘I want everybody here tomorrow morning at 7am.’ We normally trained at 10:30. We talked to him to try and get him to change the time; we had our habits.”
Another short-lived appointment was Vanderlei Luxemburgo, and Carlos says he and his pal Ronaldo saw him off after a controversial decision to limit players' access to pre-match beer and wine.
“Ronaldo and me told him: ‘Professor, people here have their habits, you’ll see what they are, but don’t try to change them. Don’t take the wine off the table or stop the beers before dinner or you’ll find yourself with a problem'.
“What did he do? First he took away the wine, then he banned the beers. He lasted three months. Football is a small world, the directors heard about it and it was “adios.””
Sports