How Argentina's economic crisis is hurting women more than men 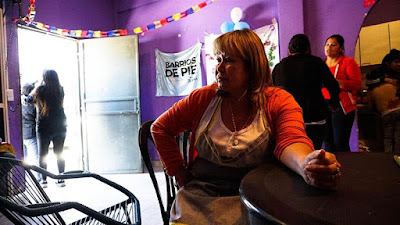 Buenos Aires, Argentina- A year ago, Mariana had her hands full, working 12-hour days as a seamstress at a textile factory and raising five children in Villa 21-24, an impoverished settlement on the margins of Buenos Aires.


As Argentina's recession worsened, her clients dwindled along with her work hours and pay. In March, her boss told her he could no longer afford to keep her.
Mariana, whose name is being changed to protect her privacy, thought she would land a new job relatively quickly, given her five years of experience. But the weeks crept by and all she could find was sporadic work cleaning houses, but nothing stable.
She told Al Jazeera that her husband, who had lost his job months earlier, blamed her for their deteriorating financial situation.
"We always had problems, but they weren't daily. Things got worse when I lost my job," said Mariana, who left her partner in May.
Mariana now manages a soup kitchen supported by the anti-austerity movement Barrios de Pie, which supports the unemployed. Since taking on the role in March, she says she's seen exponential growth in entire families needing assistance, and women confronting situations similar to hers.
The economic crisis has wended its way into the fabric of Argentina, manifesting in skyrocketing levels of poverty, the faces of children begging on the streets, thousands of small businesses shutting their doors and those that stay afloat hiking prices to try and keep pace with the peso's plunging value.
The markets went haywire in the aftermath of the August 11 presidential primaries that saw incumbent pro-market President Mauricio Macri suffer a 15-point defeat to left-of-centre Alberto Fernandez and his Peronist running mate, former President Cristina Fernandez de Kirchner.
But the vote itself was a mere affirmation of the desperate economic straits that had already engulfed entire swaths of Latin America's third-largest economy.
Poverty in Argentina climbed to 35.4 percent in the first trimester of 2019, eight percentage points higher than the previous year, according to the latest figures from the national statistics office. That means that more than 15 million Argentines are living in poverty.
Last month, the Argentine senate passed a "food emergency" law boosting financial support for food and nutrition programmes by at least 50 percent until 2022.
It is often women - the most precarious segment of the workforce - who endure the greatest financial hardships in times of economic crisis. And this is an issue that activists and politicians have sought to push onto the national agenda during this presidential-election season.

The link between poverty and 'poverty of time'

In Argentina, about 62 percent of women work, compared to 81 percent of men. But women face higher levels of unemployment - at 11.2 percent compared to 10.2 percent for men. Women earn less than men, due to working fewer hours outside of the home and ingrained biases that devalue sectors of the economy dominated by women.
Women are also more likely to have informal, unregulated jobs that don't offer pensions or other social benefits that act as a safety net to protect against homelessness and hunger.
Not surprisingly, when a woman is the head of a household, the family is far more likely to live in poverty.
Many economists attribute the gender poverty gap in Argentina to patriarchial mindsets that devalues work traditionally ascribed to women. Eradicating that is part of a broader fight for women's rights that has been articulated in this election cycle through policy agendas that include legalising abortion and eliminating gender-based violence in the country.
"In order to talk about autonomy over our bodies, we need to have economic autonomy," says Mercedes D'Alessandro, an economist and author of the book Economia Feminista.
Throughout the world, economists have found that gender biases in the labour force feed on pernicious stereotypes that see women as homemakers and childcare providers, even though many women, including mothers, must work outside the home to support themselves and their families.
"That results in a poverty of time that strips her of the ability to look for paid work," says Florencia Caro Sachetti, coordinator of social protection in the Center for the Implementation of Public Policy Promoting Equity and Growth (also known as CIPPEC, its Spanish acronym).
CIPPEC recently published a report on gender equity in the economy that called on the Argentine government to address the gender gap.
In October, the photo of a woman working in Buenos Aires as a food delivery courier with an infant strapped to her went viral on social media, in part because it graphically illustrated the working conditions that poorer women, particularly mothers, often endure in Argentina. The photo had also been published without the woman's consent.
In a subsequent interview, the woman, a Venezuelan migrant who trained to be a systems engineer, said the photo had been misinterpreted and that she had been taking her child to day care. But for many observers, it nevertheless underscored deep-rooted problems that need to be tackled.
"It's not a minor fact that among the poorest fifth of the population, women are overrepresented," said Victoria Gallo, a sociologist and member of the Equipo Latinoamericano de Justicia y Genero (Latin American Team on Justice and Gender) in Buenos Aires.
Statistics show that when an economic crisis hits, it is women who set out to join the workforce for the first time, while still shouldering the brunt of unpaid labour at home.
The "double workload" that many women have to juggle is also exacerbated through budget cutbacks that, for example, result in longer hospital wait times or fewer programmes for children, added D'Alessandro.
"If the services provided by the state are reduced, they are going to have to absorb more of that load," she said.

A recent report from CIPPEC found that funding more childcare spaces, extending the primary schoolday, and boosting financial assistance to children from low-income families could create thousands of jobs and spur economic growth. The organisation is also calling for greater parental-leave benefits, which at the moment are limited to three months for mothers and two days for fathers.
Without a broader redistribution of the role of caregiver in society, says Gallo, "we won't ever be able to close these economic gaps".
The economic burden falling on Argentine women was on display one recent Sunday in Villa 21-24. Mothers and daughters assembled in a former storefront with purple walls and a mural made by children featuring tiny handprints.
The women retrieved vegetables from a sparsely stocked pantry and pitched in to make dinner.
"Mothers are economists," said Claudia Pedrozo, a rosary with a medallion of Mother Teresa laying atop her apron. "You open the cupboard, and you have five products in there, and you have to make it to the end of the week, or the end of the month. You have lentils. You have polenta, rice, peas. You have to make magic with all that, so that you can feed your family."
Funding from Barrios de Pie doesn't go far enough to feed all the families in need, so they raise money through bake sales and dig through crates of expired produce in the wholesale market in Buenos Aires to see what they can salvage.
But the economic crisis is felt in other ways. A recent report from UNICEFnoted that women in Argentina were reporting more violence at home than usual, and believed the dire financial situation was to blame. Women who are in abusive relationships are often bound to their abusers by economic necessity because they cannot afford to leave.
"Little by little they open up, or they just burst out crying," says Mariana. "We close ourselves off in a room and start crying together. I tell them, I can understand you. If you need help, we're here to help you."
Business