Canada election: What you should know 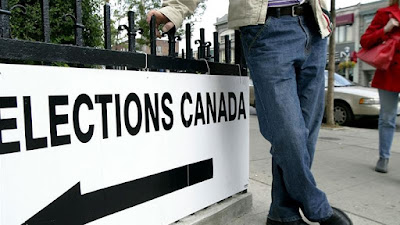 Montreal, Canada - Canada's 43rd general election will take place on Monday in a poll seen largely as a referendum on Prime Minister Justin Trudeau, who has been rocked by recent scandals.


It is a close race between Trudeau's Liberals and Andrew Scheer's Conservatives, with Jagmeet Singh's New Democratic Party making gains in the final week of campaigning.
Although analysts say the campaign has largely failed to inspire voters, millions of Canadians are expected to cast a ballot on Monday for the country's next parliament.
Here's a look at everything you need to know about the upcoming vote.

1. How does Canada's electoral system work?

Canada has a first-past-the-post electoral system.
Two parties have formed governments for most of the country's history: the Liberals and the Conservatives.The candidate with the most votes wins a riding (electoral district), and the party to win the most ridings will form a government. The prime minister is not elected directly; instead, the winning party's leader will take up the top post.

2. How many seats are up for grabs?

The House of Commons (the lower house of Parliament) has 338 seats - so voting will take place in 338 ridings across the country.
The distribution of the ridings is based on population size.
Ontario, the country's most populous province, counts 121 ridings, Quebec has 78 ridings, and British Columbia has 42. In contrast, the small Atlantic province of Prince Edward Island has four ridings.

3. What political parties are vying for votes?

There are five main federal parties in Canada.
The incumbent Liberal Party, headed by Prime Minister Trudeau; the Conservative Party, headed by Scheer; the New Democratic Party (NDP) led by Singh; the Green Party led by Elizabeth May; and the Bloc Quebecois, headed by Yves-Francois Blanchet. 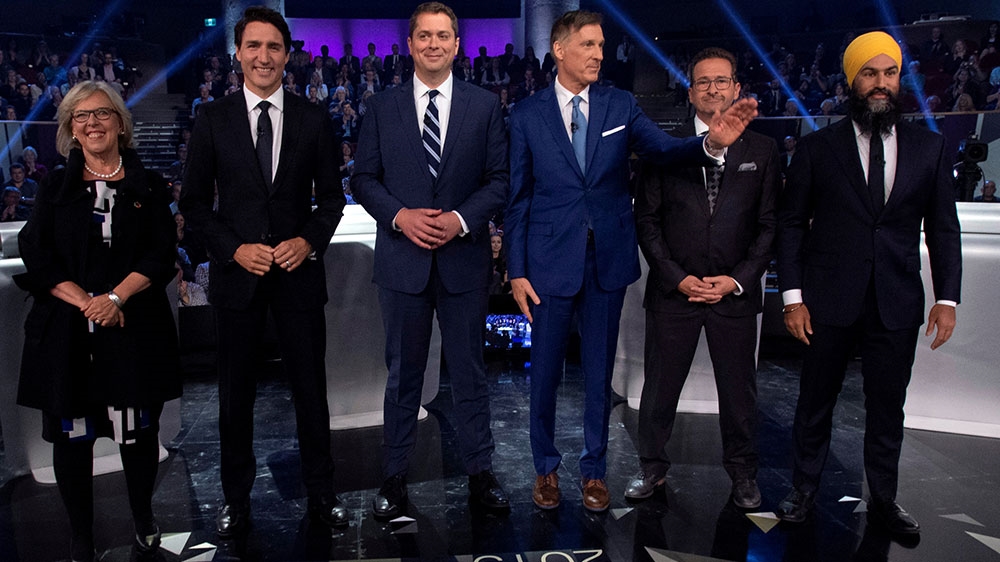 Federal party leaders, Green Party leader Elizabeth May, Liberal leader Justin Trudeau, Conservative leader Andrew Scheer, People's Party of Canada leader Maxime Bernier, Bloc Quebecois leader Yves-Francois Blanchet and NDP leader Jagmeet Singh, pose for a photograph before the Federal leaders debate in Gatineau, Quebec, [Adrian Wyld/Reuters]
The People's Party of Canada, led by former Conservative MP Maxime Bernier, is fielding candidates for the first time this year. But the far-right party "has been unable to make a mark during this campaign and its only realistic hope for a seat is Maxime Bernier's", CBC News reported.

4. What are some of the key issues?

Jobs and the economy have figured prominently in several of the parties' electoral platforms, with the Liberals and Conservatives pledging more support and economic incentives for middle-class families.
But there has largely been a dearth of debate on policy.The environment and the fight against climate change have also been important - as mass protests calling for action on climate change took place in several Canadian cities in the middle of the campaign.

5. What were the results of the last election?

The Liberals won 184 parliamentary seats in 2015 and formed a majority government.
The Conservatives, which had been in power since 2006, won 99 seats and became the official opposition, while the NDP under former leader Thomas Mulcair took 44 seats. 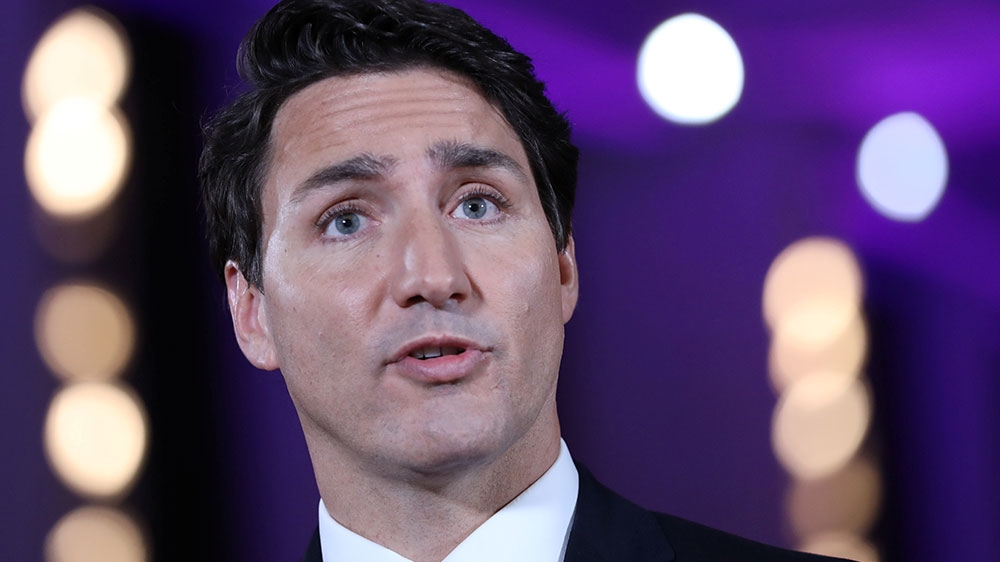 Liberal leader and Canadian Prime Minister Justin Trudeau speaks at a news conference after an English language federal election debate [Carlos Osorio/Reuters]
The separatist Bloc Quebecois, which only has candidates in the province of Quebec, won 10 seats, while the Greens won a single seat in British Columbia (that of May, the party leader).
In 2015, just over 25.9 million people across Canada cast their votes, up from about 24.2 million four years earlier.

6. How are the parties expected to do this time?

The Liberals and Conservatives have been neck-and-neck at the top of the polls for weeks.
More specifically, the left-leaning NDP has seen a late surge, bolstered by strong debate performances from Singh, the party's leader, while the Bloc Quebecois is having a strong showing in Quebec."The two frontrunners remain in a statistical tie nationally as they both have lost support to other parties," said Darrell Bricker, CEO of public affairs at market research firm Ipsos Canada, on October 15.
According to an Ipsos poll published on October 15, the Conservatives were polling at 32 percent support, compared with 30 percent for the Liberals, 20 percent support for the NDP and eight percent for the Greens. In Quebec, the Bloc Quebecois enjoyed 30 percent of the vote. 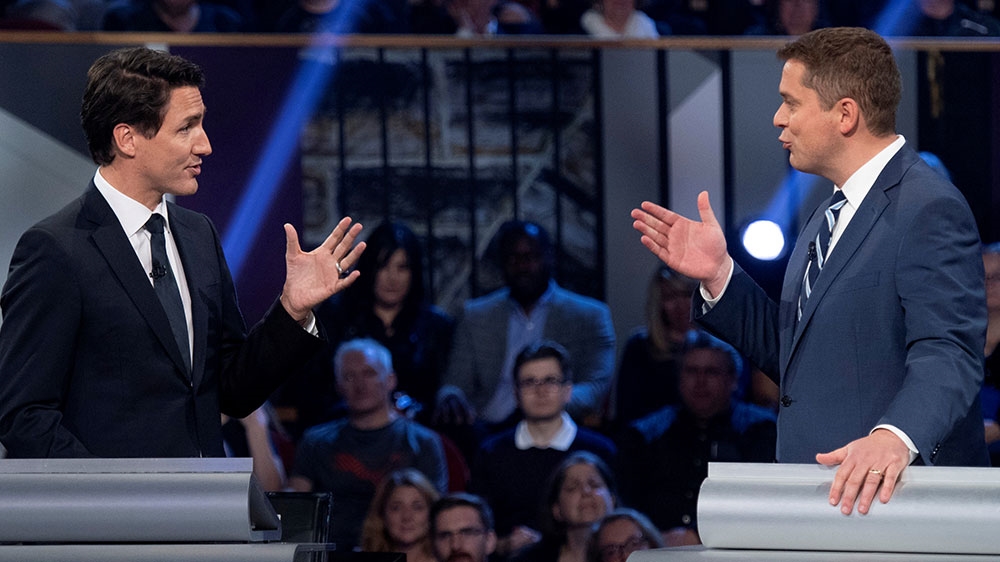 Conservative leader Andrew Scheer and Liberal leader and Canadian Prime Minister Justin Trudeau gesture to each other during the Federal Leaders Debate in Gatineau, Quebec [Justin Tang/Reuters]
Earnscliffe Strategy Group, an independent Canadian research group, also said on October 10 that the Liberals and Conservatives were "locked in a virtual dead heat" with neither party having a direct path to a majority government.
It reported on October 18 that the Liberals had a 48 percent chance of winning the most seats, but still falling short of a majority, while the Conservatives held a 40 percent chance to do the same.That was echoed by CBC News' poll tracker, which aggregates all the election-related opinion polls.
"The New Democrats or Bloc Quebecois could hold the balance of power and both have the momentum going into the final stretch," CBC poll analyst Eric Grenier wrote.

7. What happens in the case of a minority government? 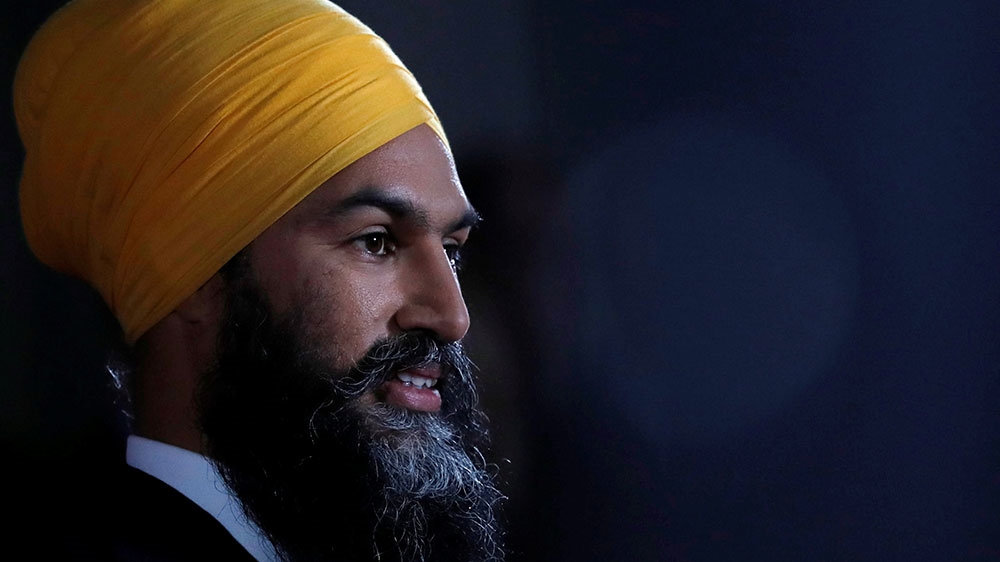 New Democratic Party leader Jagmeet Singh speaks at a news conference after an English language federal election debate [Stephane Mahe/Reuters]
As it stands, Trudeau remains prime minister until he resigns or is dismissed by the governor-general, CBC News said. That means he could get a first crack at forming a government, even if his Liberal Party doesn't win the most seats in the election.
On October 16, Conservative leader Scheer told CTV News that he "we would expect that other parties would respect the fact that whichever party wins the most seats gets to form the government".
8. Could a coalition government be formed?CBC News reported that "with some exceptions, [minority governments] have typically lasted less than two years" in Canada's history.
Most of the parties have shied away from questions about whether they would enter into a coalition in a minority government situation, instead urging Canadians to vote for their respective parties outright.
Singh, the head of the NDP, said on October 13 that he would "absolutely" consider working with other parties in order to prevent a Conservative government, however. "We're not going to support a Conservative government," he said.
Trudeau has ducked questions about whether he would form a coalition with the NDP. His party and its supporters have instead argued that voting for anyone other than the Liberals would hand a win to the Conservatives. 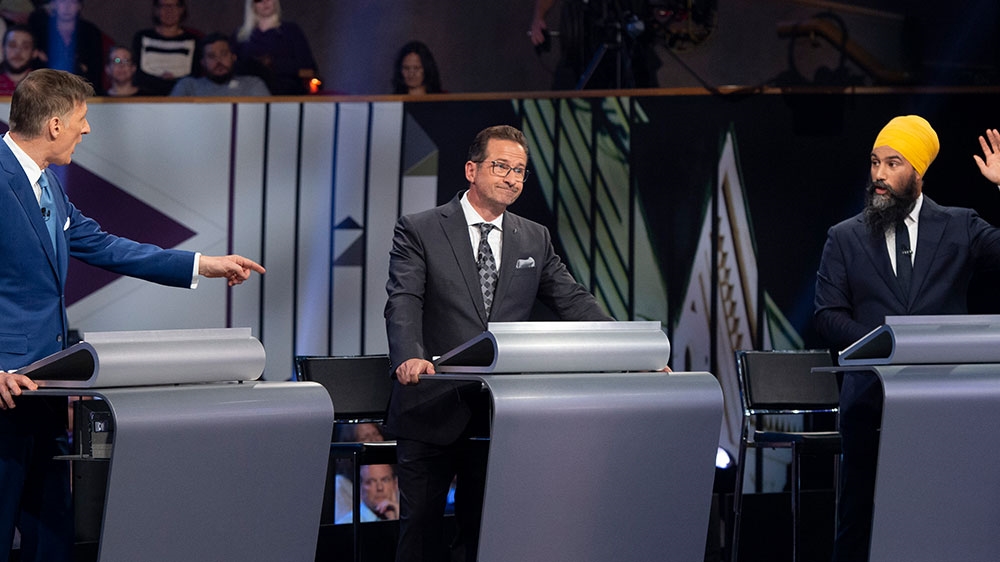 Bloc Quebecois leader Yves-Francois Blanchet, centre, listens to NDP leader Jagmeet Singh, right, and People's Party of Canada leader Maxime Bernier speak during the Federal Leaders Debate [Sean Kilpatrick/AFP]
Scheer, for his part, has said a coalition would be a "desperate attempt to cling to power".
"My message to Canadians is this: only a Conservative majority government can prevent a government with Justin Trudeau as the spokesman but the NDP calling the shots," the Tory leader said on October 14.
May has said the Greens would talk to all the parties if the vote leads to a minority government.
Blanchet of the Bloc Quebecois, meanwhile, said the separatist party wouldn't join a coalition government, but would make decisions on an issue-by-issue basis.
"Whatever the scenario, if what the government proposes, whatever it is, is good for Quebec, the Bloc Quebecois will collaborate. If it's bad for Quebec, the Bloc Quebecois will oppose it. Between the two, we'll negotiate things," he said on October 13.
Politics