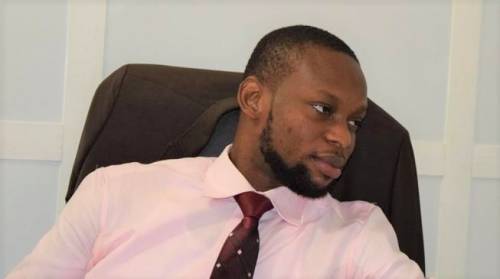 Fisayo Soyombo, a Nigerian investigative reporter, says he has gone into hiding as Nigeria's security operatives hunt for him.


The journalist is being wanted, according to reports, by the President Muhammadu Buhari regime, for exposing corrupt practices in the Nigeria Police Force and Nigerian Correctional Service.
“It's true. I'm in hiding,” Soyombo told newsmen when asked to confirm if it was true that Nigeria's security agencies were hunting for him.
If arrested, Soyombo might be charged with and prosecuted under Section 29 of the Nigeria Correctional Service Act.
Fisayo, in his investigative report, spent two weeks in detention — five days in a police cell and eight as an inmate in Ikoyi Prison — to track corruption in Nigeria’s criminal justice system, beginning from the moment of arrest by the Police to the point of release by the prison.
Adopting the pseudonym Ojo Olajumoke — feigned an offence for which he was arrested and detained in police custody, arraigned in court and eventually remanded in Prison. In the second of this three-part series, he exposes how the courts short-change the law, and the prisons are themselves a cesspool of the exact reasons for which they hold inmates.
Since the release of the second part of his report, the Nigerian government has been on the trail of the journalist.
It was gathered that the Buhari regime planned to arrest Soyombo at a workshop on fake news organised by Goethe Institute on Tuesday evening.
He has since pulled out of the event.
Nigerians on social media have raised concerns over the planned arrest.
Dayo  Aiyetan, the founder of the International Centre for Investigative Reporting condemned the planned arrest.
“So for his #undercover work exposing #corruption in the #prisons, #Nigerian govt wants to arrest @fisayosoyombo & charge him for #Espionage? Shame on the govt,” he tweeted.
Olusegun Awosanya, a human rights activist, also said any attempt to arrest Soyombo would be an affront on the nation.
He said: “The Criminal Justice System is rotten. This is no news to Nigerians and the authorities themselves and the reaction to findings of investigative journalists as well as advocates of reforms must never be belligerent. The Nigeria Correctional Service must get this! #KeepFisayoSafe.
“They (CG especially) should learn from previous advocacies and take dressing like @PoliceNG and @nigimmigration when @SIAF_NG exposed their running issues within. This is not the time to venture further
into criminality by seeking to incriminate a whistleblower. #KeepFisayoSafe
“Any attempt to incriminate, intimidate, harass, abduct or engage in any act of persecution of @fisayosoyombo will pitch the Nigeria Correctional Service against the entire Nation and we will all respond effectively and adequately. Nigeria belongs to all of us & you must comply.
“The Nigerian Correctional Service is a service to the people and MUST be guided in their response to feedback from the public. Exposing organized crime within the system must not be seen as an attack on anyone begging for reprisal but a path to healing. #KeepFisayoSafe
“The ‘Honorable’ Minister of Interior @raufaregbesola should call the leadership of the Nigerian Correctional Service to order in this regard. The public perception of all uniformed officers in Nigeria is negative already and this must not be made worse. #KeepFisayoSafe.”
President Muhammadu Buhari’s administration has engaged in gagging the press and repressing the freedom of the media in Nigeria.
A report by the Amnesty International revealed that at least 19 journalists and media practitioners have been attacked, brutalized and/or arrested in Nigeria between January and September 2019.
Reporters Without Borders, an organisation that conducts advocacy for freedom of information and press freedom, ranks Nigeria 120 out of 180 in its 2019 Data of Press Freedom ranking.
News