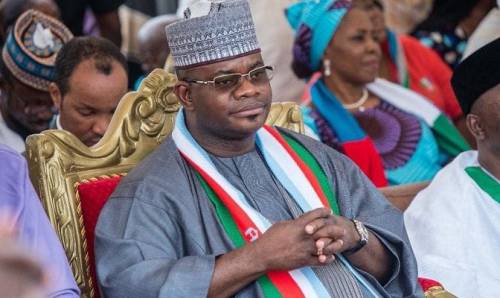 A group, the Ondo Movement for Accountability and Good Leadership, has kicked against listing Ade Adetimehin as part of campaign council members of the All Progressive Congress for the governorship election in Kogi State.


Adetimehin, the Chairman of APC in Ondo State, was last week named by the APC National Working Committee as one of the council members to support the party's candidate, Governor Yahaya Bello.In a statement by its National Coordinator, Abiodun Fanoro, the group said, "If Mr Adetimehin could betray his own party, the APC, in the last Presidential and National Assembly elections and openly worked for the opposition Action Alliance, in elections that would determine the fate of his president who is from his own party, elections in which his state has a stake in who represents it at the National Assembly, an election in which some of his party candidates were likely to be his relatives or well known friends, yet he worked against them, what then could he not do in an election that is far away from his state and in which he has little or no direct stake?" It added, "The continued membership of Adetimehin in this distinguished campaign team is no doubt a continuation of APC's double-dealing of rewarding disloyalties, thereby sending the immoral and wrong message that it pays to be disloyal."To stop this wrong message APC should not only remove Adetimehin from the campaign team, it should remove him as the state chairman and go further to remove from office all those who participated in the anti-party electoral bazar, but who are still holding one political position or the other, so that a clear message would be sent that disloyalties and illegalities do not pay.
"We also wish to add that failure to sanction these people will not help build good morals in the young ones,because by this the society is telling them that dishonesty and cutting corners pay and indeed some people are truly untouchable."
Politics