Which 2020 Democrat has the strongest climate platform? 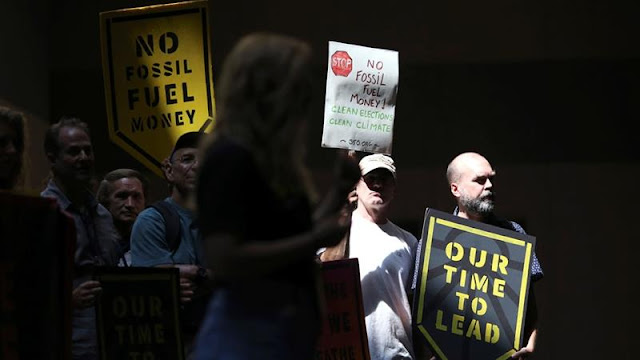 With the debate topics in the 2020 Democratic presidential race ranging from the economy and foreign policy to healthcare and the opioid crisis, there is just one issue up for discussion at the first-ever town hall focused solely on the climate crisis.


The candidates striving to be the next United States president are competing indirectly with each other on Wednesday at a seven-hour event - hosted by CNN in New York City - to present the best climate platform. The town hall is set to begin at 5pm (21:00 GMT).
Each candidate has a separate 40-minute conversation with one of the CNN moderators. Then MSNBC will have another climate event with the candidates on September 19-20, although the Democratic National Committee (DNC) has rejected the idea of holding an actual climate debate.
All 10 of the Democrats appearing at the climate forum - the same candidates eligible for the party's next debate on September 12 - have signed the No Fossil Fuel Money Pledge, vowing not to accept campaign contributions from the oil, gas and coal industries.
The only candidate who made climate change the centrepiece of his agenda, Washington State Governor Jay Inslee described global warming in a fundraising email as "our REAL national emergency".
Inslee dropped out of the race in August, leaving a vacuum for others to seize the climate mantle. But at least in part due to his example, the topic increasingly garners attention nationally - as Democratic voters overwhelmingly support immediate action.
Here's a look at the ideas proposed by the contenders, as many activist groups push for nothing less than a climate emergency declaration and mass mobilisation.

Elizabeth Warren, a US senator from Massachusetts, cosponsored the Green New Deal.
"Climate change is real, it threatens all of us, and we have no time to wait to address it head-on," Warren tweeted in February.
During a late-night interview on network television earlier this year, she said, "We ought to be working on it together. Congress, the president, as a country." And on the eve of the climate town hall, Warren fleshed out her $3 trillion plan for achieving 100 percent clean energy in 10 years - building on Inslee's model.
Her agenda includes plans to reduce emissions for US military operations, limit fossil-fuel extraction on public lands, and revitalise a greener manufacturing sector. Warren says money in politics allows oil and gas companies to corrupt legislators, so ending lobbying is integral. She has also sponsored the Climate Risk Disclosure Act to force companies to be more open with investors about climate risks.
Warren's $1.5 trillion plan for Green Industrial Mobilization centres on government procurement of low-carbon technology. Her Green Apollo Program would involve $400bn in energy research, while the Green Marshall Plan would facilitate the purchase of US green technology innovations by foreign countries.

Beto O'Rourke, a former congressman from Texas, was the first 2020 Democrat to release a climate plan.
"Climate change is the greatest threat we face - one which will test our country, our democracy, and every single one of us," says O'Rourke's campaign website, pointing to the "growing emergency that has already started to sap our economic prosperity and public health".
O'Rourke's vision involves re-joining the Paris agreement, setting legally binding greenhouse-gas emissions targets, and imposing strict new efficiency standards.
His proposal would also shore up vulnerable parts of the US against catastrophic climate events, and raise $5 trillion dollars for clean energy investment. 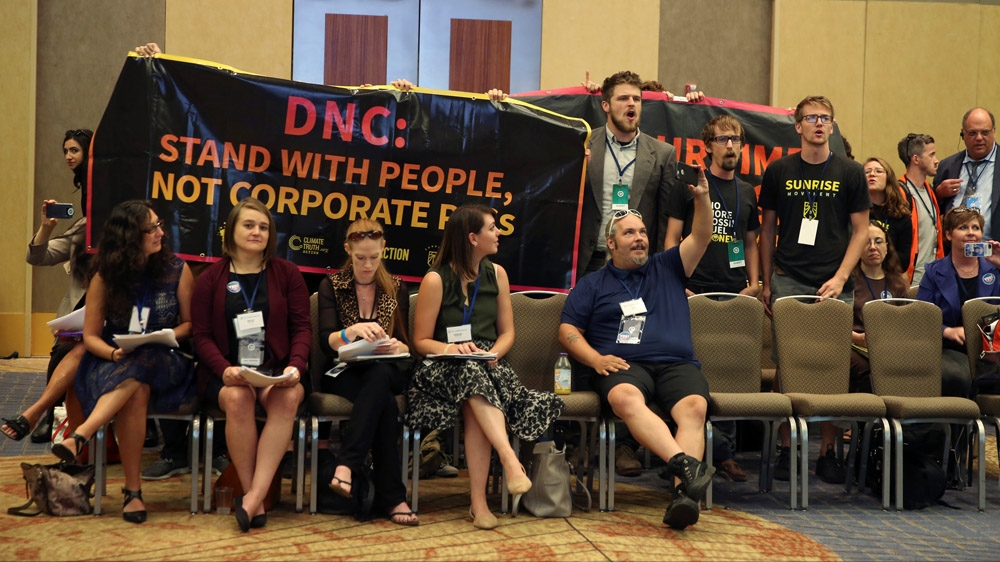 With the distinction of having introduced the first climate change bill to the Senate in 1987, former Vice President Joe Biden has touted a "middle ground" approach - which has invited harsh criticism from some environmentalists.
Biden - who supports the Green New Deal, backs the idea of a climate debate, and rejects fossil-fuel donations - has promised $1.7 trillion in climate spending over the next 10 years.
His plan, which revolves around a 2050 deadline to build a net-zero emissions economy, also requires big modifications to the US tax code, pressure on other nations to cut back on carbon pollution, and government help for the Americans most affected by climate change.

In an email to supporters announcing his decision to run for president in 2020, Bernie Sanders said, "We need a president who understands that climate change is real, and is an existential threat to our country and the entire planet."
The US senator from Vermont and Green New Deal cosponsor added, "We can generate massive job creation by transforming our energy system away from fossil fuels to energy efficiency and sustainable energy."
On August 22, Sanders released his own $16.3 trillion Green New Deal concept to generate 100 percent of electricity from renewables by 2030 and attain "full decarbonisation" by 2050. The 10-year federal "mobilisation" would factor climate change into every policy action and aims to create 20 million new jobs.
The far-reaching Sanders plan also looks to ban fracking and prohibit all imports and exports of fossil fuels. Additionally, it sets a moratorium on nuclear plant renewals and commits $1.3 trillion to help workers transition from carbon-intensive industries. 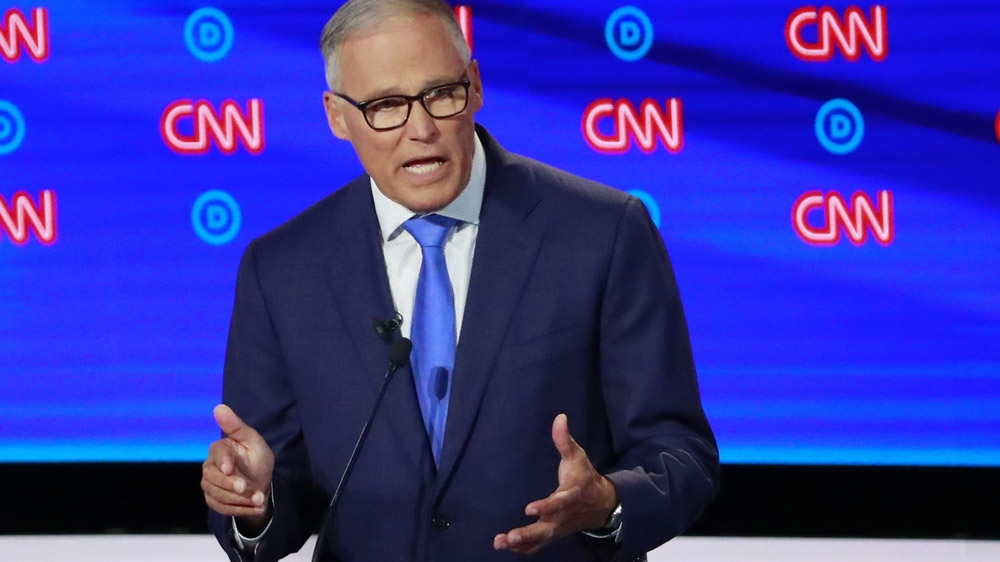 Andrew Yang, an entrepreneur, released his climate policy on August 26 with a proposal called "Lower emissions, higher ground". The document offered ways to combat climate change, prevent further damage to the planet, and invest in natural disaster prevention.
The policy's core elements include building a more sustainable economy, moving to higher elevation, reversing global warming trends, and holding presidential administrations accountable by passing a constitutional amendment that forces the government to act as steward for the environment.
His plan promises to end the influence of corporate lobbyists and oil executives. Yang also seeks to couple a carbon fee with a border adjustment tax to make sure imports from other countries cannot skirt US climate laws. But Yang also favours an increase in reliance on nuclear power.

On September 3, Cory Booker released his $3 trillion proposal to address the climate crisis if elected. The US senator from New Jersey pledged to phase out fossil fuels and create a carbon-neutral economy.
"Without immediate action, we risk an incredible human toll from disasters, health impacts, rising national security threats, and trillions of dollars in economic losses," said the Green New Deal backer.
His plan would end subsidies for fossil-fuel companies and instead charge them a carbon fee that would go towards a "progressive climate dividend" paid to Americans. In addition, the plan seeks to revive the Civilian Conservation Corps to help low-income and other frontline communities.

Amy Klobuchar, a US senator from Minnesota, outlined a 13-page plan at the beginning of September to "create new opportunities [to] tackle the climate crisis". Klobachar also cosponsored the Green New Deal.
Klobuchar's $1 trillion proposal would bring back to life former President Barack Obama's Clean Power Plan, aim for completely net-zero emissions by 2050 and raise $150bn in clean energy bonds.

Julian Castro's "People and Planet First Plan" pledges to spend $10 trillion to solve what he calls the "greatest existential threat to our future" through a National Climate Council.
His campaign says that government investments over the next decade would result in the creation of 10 million new jobs, and the effort will be funded by a carbon pollution fee - in addition to inheritance and wealth inequality taxes.
The former Secretary of Housing and Urban Development under Obama seeks to phase out electricity generated by coal in the next 10 years. He also says the US will become a net-zero emitter by 2045 and plant one billion trees every year until 2050.

When Kamala Harris launched her presidential bid, she expressed her strong support for climate legislation aiming to generate jobs, invest in green infrastructure, and cut carbon emissions.
"We need a sense of urgency and a bold agenda to address the climate crisis," the US senator from California tweeted.
Harris revealed her $10 trillion climate plan on Wednesday, just hours before the town hall. As part of her "Climate Plan for the People", Harris wants the US to reach the goal of 100 percent carbon-neutral electricity by 2030 and build a clean economy by 2045.
Harris said she will also rejoin the Paris climate agreement and supports a "climate pollution fee".
"We can drive down pollution while raising government revenues that can be used to address the harms of greenhouse gas emissions," she said in her plan, adding that she will "involve frontline communities in the fee development process".

As the youngest candidate in the crowded Democratic field, Pete Buttigieg often tells voters that both he and they will still be alive when the impacts of climate change worsen around mid-century.
"This is, after all, the generation that's gonna be on the business end of climate change for as long as we live," the South Bend, Indiana, mayor said in April.
Buttigieg unveiled a relatively modest climate programme that would cost some $1.5 trillion and generate 3 million jobs. He has also called for a US Climate Corps within his proposed national service initiative.
Politics