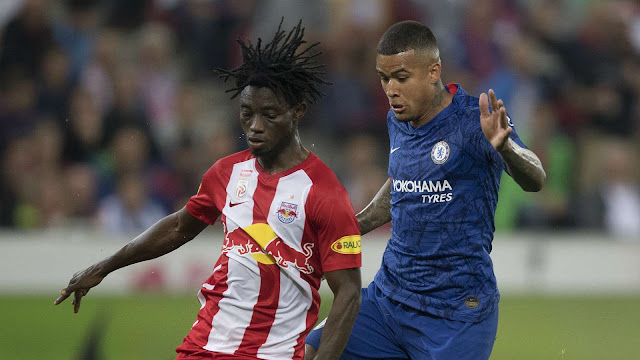 
After fine performances for Red Bull Salzburg against Chelsea and Real Madrid in pre-season games, the 21-year-old became subject of transfer speculations, with reports indicating a move to the Blaugrana, where he would start out with the reserves.
Ultimately, the move never materialised as the Ghana U23 man, who was also linked to Scottish giants Celtic, headed for Belgian outfit Zulte Waregem on loan for the 2019-20 season.
"Yes it [the news] was true but the only thing that may keep people doubting was they [Barcelona] never came to Red Bull to make a proposal," Mensah explained to Footballmadeinghana.
"But I had a call from one guy [agent] that they [were] working on this for me and that it was true and they had to make a board meeting.
"The next day I saw news on the Internet. One guy sent it to me from Ghana I and opened it and I read 'Gideon might go Barcelona B and trained with the first team' and I called this agent and asked ‘Did you tell anybody about this move?'
"He was like 'No' and then he called and said the story was also circulating in the Spanish press because there was one scout from Barcelona who published the news out already."
At the height of the transfer speculations, Red Bull sporting director Christoph Freund poured cold water on the rumours, revealing to Salzburger Nachrichten the club has had "no contact with Barcelona".
Mensah sheds more light on the situation: ''The only hitch was that they [Barcelona] didn’t come to Red Bull, so Red Bull were also in doubt [and were] thinking 'when are they coming and what is going on?' They [kept] asking me.
"I was like 'I spoke with them [agency] and they said they [Barcelona] are going to come' but they never came because actually, they were also working on getting [another] left-back from Spain so it was between me and that guy. The team was like they took the left-back from Spain [in the end]."
Yet to make a competitive first-team appearance for Salzburg, Mensah spent the second half of last season on loan at Sturm Graz, where he made 15 league appearances involving 15 starts.
“[Initially], I wasn’t so sure about the news. When he [agent] told me, I was like 'how is it possible?'. Because when the news is coming, sometimes you see it coming but this was news that nobody saw coming,” the former Wafa full-back added.
“He [agent] called me because we were working on going on loan at St. Pauli and called to tell me like 'St Pauli is not going to go through but Barcelona want to take you'.
“I was like 'how?' He was like 'you don't need to understand now but I'm going to explain to you later'. So the next day when the news came [out in the media], I knew about it already so it wasn't surprising.
“I was ever ready and I think I’m ever ready [for Barcelona] now in this time of my career. I just needed to go there, take my time, learn how football is going on in Spain and continue to do what I'm doing best."
Sports