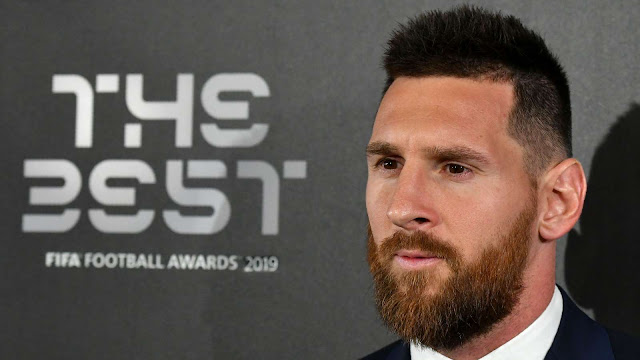 
Messi sealed the victory by leading Barcelona to yet another La Liga title last campaign, his 10th since breaking through with the club.
He fired 51 goals across 50 appearances for the Catalan side, marking his 10th consecutive season with at least 40 finishes.
Monday's ceremony signalled the fourth time the prize had been presented, having previously been merged with France Football's Ballon d'Or, with Real Madrid's Champions League successes dominating the award's early history.
Ronaldo had won the award in 2016 and 2017, having led his team to Champions League crowns, with Messi finishing second in the voting in each season.
Luka Modric then took home the trophy in 2018 following yet another Champions League triumph, the club's third in a row, as well as a run to the World Cup final with Croatia in Russia.
There was no stopping Messi, this year, though, as he was also named in the FIFA Men's World XI alongside Van Dijk, Ronaldo, Modric, Alisson Becker, Marcelo, Matthijs de Ligt, Sergio Ramos, Eden Hazard and Kylian Mbappe.
It wasn't all successful for the Barca star, though, as 18-year-old Hungarian Daniel Zsori topped his strike against Real Betis to claim the Puskas Award.
Many had pegged Van Dijk as the favourite to win the honour of this year's best player, as the Dutch defender had anchored a Liverpool backline widely considered the world's best.
The Reds centre-back, who was named PFA Players' Player and Premier League Player of the Year, helped guide the team to a Champions League victory, having topped Messi's Barcelona along the way, while also leading the Netherlands to the Nations League final, where they fell to Ronaldo's Portugal.
In addition to his international success, Ronaldo helped Juventus claim yet another Serie A title while also claiming the Italian Super Cup.
Ronaldo finished as Juventus' top scorer across all competitions, having netted 28 goals in 43 matches, including 21 league goals, during his first campaign in Serie A.
Sports