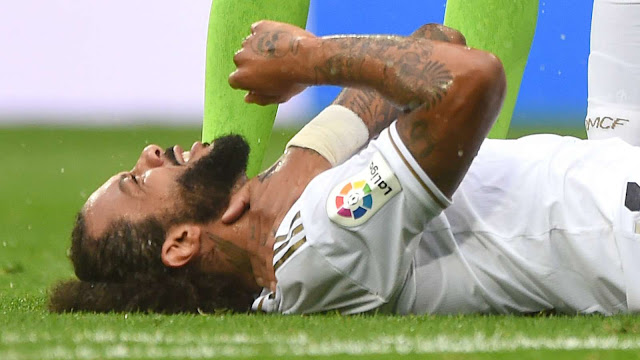 Real Madrid have confirmed that Marcelo will not play a part in a Champions League clash at Paris Saint-Germain on Wednesday after sustaining a neck injury.


The Brazil international appeared to suffer the issue in the first half of a 3-2 victory over Levante on Saturday, falling straight onto his back after attempting a shot at goal.
The 31-year-old completed the match, but Madrid have announced on Monday afternoon that he will be unavailable for the trip to France.
The club released an official statement on their website, which reads: "After the tests carried out today to our player Marcelo by the Real Madrid Medical Services he has been diagnosed with post-traumatic cervicodorsalgia. Pending evolution."
Marcelo joins Isco, Luka Modric and Marco Asensio on the treatment table, with Zinedine Zidane facing an injury crisis at Santiago Bernabeu.
Brahim Diaz and Fede Valverde are unlikely to play a part at Parc des Princes either, with both men not expected back until the end of the month as they continue to recover from respective knocks.
Club captain Sergio Ramos and Nacho will also be missing from Madrid's latest matchday squad through suspension.
Madrid's win over Levante at the weekend marked their second victory of the new campaign, which leaves them sitting third in La Liga after four matches.
PSG will likely provide Zidane's men with the sternest test of the season yet, having stormed back to the top of Ligue 1 with 12 points from a possible 15.
The two sides have been drawn in Group A in this year's Champions League, alongside Club Brugge and Galatasaray.
Zidane will be aiming to oversee a fourth European Cup triumph in his second spell in charge at the Bernabeu, after a disappointing 2018-19 season.
Madrid were knocked out in the last-16 by Erik ten Hag's youthful Ajax last term and ended up finishing the year without a single piece of silverware.
A whole host of summer signings were brought in to refresh the squad, with the likes of Eden Hazard, Luka Jovic and Ferland Mendy all arriving in the Spanish capital.
Sports