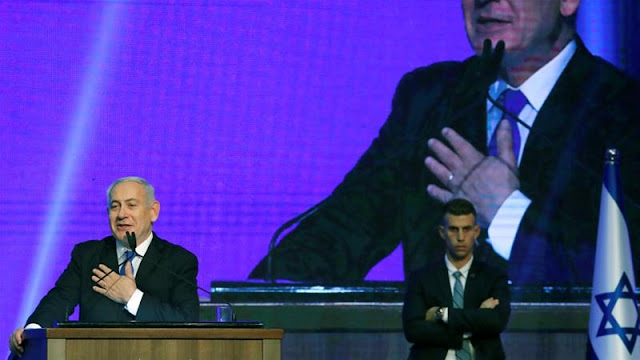 The leaders of Israel's two main political parties are heading for a deadlock after a repeat election, with exit polls and unofficial results on Wednesday showing Prime Minister Benjamin Netanyahu may not be able to form a right-wing governing coalition.


With more than 60 percent of votes counted, Netanyahu's Likud party and the Blue and White party led by former army chief Benny Gantz were neck and neck with 32 seats each, according to Israeli media reports.
The Arab Joint List, an alliance of four smaller parties, is projected to have performed better than in April election, becoming the third-largest bloc with 12 seats, while Avigdor Lieberman's Yisrael Beiteinu is expected to win nine seats.
The partial results showed that a potential centre-left bloc could win 55 seats, while a right-wing and ultra-Orthodox bloc was expected to pick up 56, both shy of the 61 seats needed for a majority. There will probably be weeks of coalition negotiations before a government is formed.
Official partial results were expected on Wednesday, while full results may not be announced by the Central Elections Committee until Thursday, as authorities implement new anti-fraud measures.
According to the electoral commission, 69.4 percent of eligible voters turned out to vote on Tuesday, an increase of 1.5 percent compared with April's election.
Analysts said the results were a defeat for the ruling Likud party, which may get fewer seats than in April's vote.
"What we see of the results so far show that Netanyahu has received a slap to the face," Majdi Halabi, an expert on Israeli affairs, told Al Jazeera.
Israeli political analyst Mayer Cohen said the results showed that voters were tired of Netanyahu, Israel's longest-serving prime minister.
"The Blue and White party's showing in this election is considered a victory, reflecting public opinion on Netanyahu," Cohen told Al Jazeera.
"The number of seats and votes that went to Gantz reflect parts of the society that don't want Netanyahu to stay any longer," he added.

With Blue and White also seemingly unable to form a coalition without Lieberman, analysts said the Yisrael Beiteinu leader could become a kingmaker.
Lieberman told his supporters in Jerusalem on Tuesday night that the "one option" was a unity government, bringing him and the two largest parties, Likud and Blue and White, together in a broad, secular coalition that would not be subject to the demands of ultra-Orthodox parties.
Netanyahu said early on Wednesday that he would seek the formation of a new "Zionist" government that excludes Arab parties.
Halabi said that he expected Gantz to form a unity government with the Yisrael Beiteinu and the Likud, which could see the ruling party split and Netanyahu kicked out.
"There is no way that Netanyahu will be the prime minister now. Even if a unity government is formed, Netanyahu is out of the game," he added.
While Cohen agreed that a unity government was the most likely scenario, he said Lieberman's role would be limited.
"Until now, the Likud has not shown any signs of giving up on Netanyahu," he told Al Jazeera.
"The most likely scenario will be that the president will get Gantz and Netanyahu to somehow agree on a unity government together in an attempt to maintain the country's stability," he explained.
In Jerusalem, some voters said they hoped to see a unity government with the two main parties taking part.
"I would love to see the Likud and Blue and White United in a unity government. That would be the best for Israel," said Ronen Cohen, a minimarket owner in the city.
David, a 20-something-year-old Likud voter from Jerusalem, said he was not happy with the emerging results.
"I wanted Bibi to win and form a strong right-wing government. I don't like the idea of a unity government," he said.

Leaders of the Arab Joint List expressed satisfaction as unofficial preliminary results gave them 12 seats, potentially making it the third-largest bloc in the Knesset.
"The era of Netanyahu is over," Ahmed al-Tibi, the leader of Taal - one of the four parties in the alliance, said after the vote.
"He will now have to go home or to prison," he said in reference to Netanyahu's legal troubles. The prime minister is facing a potential indictment in three corruption cases, with a pretrial hearing set for early October.
Over the past few weeks, the prime minister and other right-wing politicians called for installing security cameras in voting centres in Palestinian neighbourhoods, while some warned of the "dangers" of a large Palestinian voter turnout.
Halabi said the result showed that Netanyahu's "racism" and "scaremongering" had backfired.
"Palestinians or the left more generally proved that they are not afraid of Netanyahu," he said.
"It was because of their high turnout that we see the fall of the right-wing and their inability to form a coalition."
Haifa-based analyst Diana Buttu said it was unlikely that the Arab Joint List would consider joining the government but said that the turnout had stopped a rightward trend.
"Thanks to the Palestinian voter turnout, they managed to stem the tide of fascism that is taking over the country."

Despite the positivity among some Palestinian citizens of Israel, the results offered little for about 4.8 million Palestinians living under Israeli military occupation in the occupied West Bank and the Gaza Strip.
In addition to a campaign promise to annex illegal settlements in the West Bank, Netanyahu had promised in a dramatic speech last week to "apply Israeli sovereignty to the Jordan Valley and the northern Dead Sea immediately" if he won.
Although Gantz has called for pursuing peace with the Palestinians while maintaining Israeli security, he has remained largely silent on the latest US-sponsored peace plan during his campaign and avoided questions about his favoured solution to the conflict.
Separately, US President Donald Trump could reveal the political portion of the so-called US "peace plan" within the next few weeks, which is expected to address the question of a Palestinian state and the future status of the occupied West Bank, an issue that has remained unresolved since the 1967 war, when Israel captured the territory, along with East Jerusalem.
"The Trump peace plan [and when it will be revealed] will depend on who will become the prime minister. In the Israeli system, who becomes prime minister isn't about who wins the most seats, but who can actually form a government. Trump's administration will wait until that is clearer," said Buttu.
Senior Palestinian official Saeb Erekat said after the vote that he hopes the next government "will focus on how to make peace", adding that Israel "cannot have peace or security without ending the occupation, without two states, the state of Palestine to live side by side with the state of Israel in peace and security on the 1967 lines".
Trump moved the US embassy from Tel Aviv to Jerusalem, recognising it as Israel's capital and also acknowledging Israeli sovereignty over the occupied Golan Heights, seized from Syria during the 1967 war.
According to Halabi, the outcome of the election could affect the timing of the rollout of the "peace plan".
"The picture changes completely for the Palestinians now because Trump is unlikely to announce his plan without Netanyahu and a strong right-wing government in place," said Halabi. "He may either have to alter the plan or avoid publishing it altogether."
Politics