Is Tomori the best defender in Chelsea? Tomori showing against Liverpool gives Chelsea reason for optimism 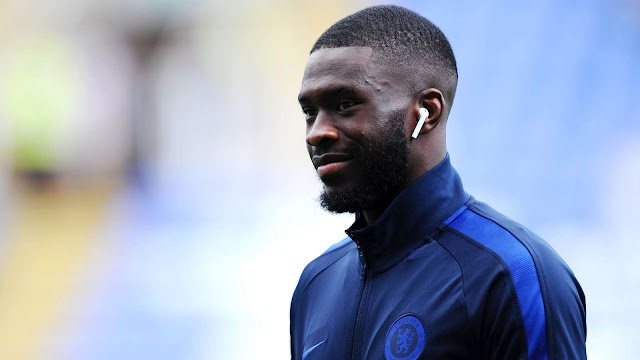 To the naked eye, Chelsea were defeated 2-1 by Liverpool at Stamford Bridge on Sunday in a loss which condemned the Blues to their second Premier League defeat of the campaign.
Furthermore, it was their second successive home setback in less than a week after Valencia’s 1-0 success in West London in the Champions League on Tuesday night.

In addition, Frank Lampard has now seen his side concede at least two goals in their last four league games against Norwich City, Sheffield United, Wolverhampton Wanderers, and against the Reds on Sunday. Their 4-0 defeat by Manchester United on opening day won’t be forgotten in a hurry owing to the enormity of the rout, which came against a close rival.
The only domestic game Lampard’s troops haven’t let in more than a goal was their 1-1 draw with Leicester City on home turf, and that was a game they were lucky to even escape with a draw after the Foxes threatened, and probably deserved, to score multiple times.
Why then should the Blues be positive after Sunday’s defeat which leaves them in the bottom-half of the standings with eight points, ten adrift of Jurgen Klopp’s side?
In all fairness, this campaign wasn’t accompanied by high expectations because of the handcuffs restricting the London giants, whose transfer ban meant a season of experimentation with several youngsters and loanees getting their chance in the blue jersey.

One of those loanees is Fikayo Tomori, who returned to the club following a temporary spell at Derby County under Lampard.
What’s most fascinating about his emergence in the early weeks of the season is the fact that he was one of the less fancied names among the returning players, with Tammy Abraham, Mason Mount and even Kurt Zouma the more high-profile returnees.
Tomori started the campaign as fourth in the pecking order of centre-backs at Chelsea behind Antonio Rudiger, Andreas Christensen and Kurt Zouma; but now, he’s risen in the ranks and is slowly becoming indispensable. That’s not been a bad ascent for a player that many thought would only feature in the less profile cup games.
The Blues’ defensive issues has meant Lampard’s had to throw his trusted lieutenant from his only season at Derby into the deep end, and the 21-year-old hasn’t let the club legend down. He’s been Chelsea’s most reliable centre-back so far, and yet again proved it against Liverpool, a game that was probably his biggest for the club.

A home defeat, by two goals no less, probably paints a picture of the Reds having the hosts under the cosh, but that couldn’t be further from the truth. Klopp’s side needed two set-piece goals to unlock the West London side, as they rarely got any joy in open play.
Admittedly, the hosts should’ve been quicker to the danger for Trent Alexander-Arnold’s opener, while the defending for Roberto Firmino’s headed effort was downright shambolic, but Tomori and co. limited the European champions’ threat considerably.
Not many defences will keep Mohamed Salah, Sadio Mane and Firmino (his goal aside) quiet for majority of the game, something the Chelsea defence did with minimal fuss. They didn’t capitulate after, unfortunately, going two goals down, neither were they affected by the pair of forced first-half changes, which saw Marcos Alonso and Zouma replace Emerson Palmieri and Christensen respectively.
Tomori’s composure and defensive astuteness over the course of the game, and especially in the second-half, was commendable as his performance bellied his young years.

Rara Avis™@Tzar_Marc
Who would've thought Tomori would be our most impressive centreback by now.

See Rara Avis™'s other Tweets
Given the deficit and Alonso’s penchant for focusing on attacking, the Blues’ left sided centre-back often found himself needing to cover the space vacated by the left-back. The ever dangerous Salah occupied that wing in an attempt to make the most of Alonso’s forward forays, but Tomori snuffed out the Egyptian’s threat time and again.

This wasn't lost on Lampard, who was effusive about Tomori’s performance after the game.
“I have to single out Tomori. For a young player like him to go up against Mo Salah, who is lethal, and deal with him for pace and in the mind, I thought was class,” Lampard said after the game. “Everything he did was. Those are the signs I’m looking for individually.”
Tomori attempted more tackles than any other defender on the pitch, won seven of his eight duels and wasn’t dribbled past for the entirety of the game. The fact Chelsea attackers knew the defence had things under control gave them even more confidence to attack Liverpool’s floundering backline, and were unlucky to not score a second.
Ultimately, while numbers may not tell the whole story, it often gives an insight into most situations and issues. For Lampard, he has to fix the problems plaguing a rearguard that seem to concede from preventable circumstances, as having to score more goals than the opposition week in week out is impractical.

Nizaar Kinsella ✔@NizaarKinsella
Lampard praises Kante but quickly moves on Tomori: "I have to single out Tomori to do what he did against a player against Mo Salah, I thought it was class." Adds, Alonso had a big performance #CFC #CHELIV #LFC
1,207
7:18 PM - Sep 22, 2019
Twitter Ads info and privacy

187 people are talking about this
The Blues have conceded 13 goals after six games, which is the third highest in the division – only Watford (18) and Norwich (14) have more. They are on course to let in 82 goals this term, a ridiculously high number for a side that allowed only 39 (joint third with Tottenham Hotspur) under Maurizio Sarri last year.
For a bit of context, the 11th-placed side have scored 12 times, level with Spurs in third, but their soft underbelly threatens to derail their campaign.


Lampard’s probably been pulling his hair out at the defensive mishaps he’s witnessed in the first six gameweeks by the personnel in his backline. In Tomori, however, he possesses a dependable centre-back who, it seems, can be counted on to deliver amid their defensive deficiencies.
Sports