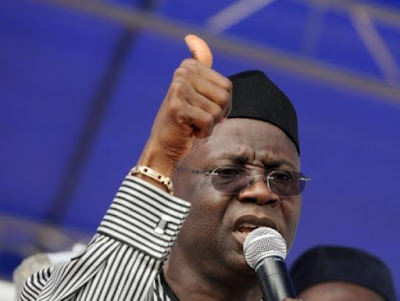 Founder of the Latter Rain Assembly, Pastor Tunde Bakare has explained what led to the standoff between him and General Overseer of Winner’s Chapel, Pastor David Oyedepo, some years back.


In a recently published interview he granted the Punch, Bakare when asked his take on anointing oil, mainly used by Christians for prayer purposes, responded: “People like to create their own Tunde Bakare. I love God, I love people, I love the godly and the ungodly and I try within my God-given ability to teach the truth.
“The reason I fought with my friend, Bishop David Oyedepo, and tore his book, I remember when we resolved this problem in London, we came out of a plane, he took me aside and said he was angry with me because I tore his book. I said I didn’t tear your book, I tore my book. That is fine, you wrote it, I bought it, so it was my book I tore.
“I saw errors in that book because he said the anointing oil is not a symbol of the Holy Spirit, that it is the life of God in a bottle. How can you write that and I would let it pass. No! If the anointing oil is the Holy Spirit, then Jesus is a lamb walking on four legs.
“These are metaphors and when you have the real, you leave the shadow. Besides it is for the sick in the New Testament. So, you can anoint the entire church if they are sick and I would wonder how a sick church can bring healing to a dying world”.
On his description of Nigerian churches as being a theatre where one man performs and the others are just mere spectators, he said “If you quoted me correctly, I said the difference between the cinema and the church in Nigeria is that for the cinema you pay a gate fee before you enter, but in the church, they let you come in before they take from you.
“When the youth pastor was ministering today (day of interview) I said wow, if I am out of here today, these people can continue”.
Explaining why his church has not established its own university like others have done, Bakare said he was not called to do that.
“I do not judge those who are doing it, because they are contributing their quota to the system and they are helping the society in the area of infrastructure.
“But I would have a question mark on the whole thing if part of what is going in there are the offerings of the people and their pastors’ children and members’ children cannot attend that university. Almost all the top universities in the world started from Christian organisations.
“My daughter graduated from Emory University in Georgia, United States, which is owned by the Methodist Church. Oxford and Cambridge were established by churches.
“If their real intention was mission and to educate a crop of leaders that would share the light, I commend their efforts. But if it is money-making and profit-driven, then I don’t know what to say”.
Responding to a question on why Latter Rain has not staged conventions like other big Nigerian churches, the running mate to General Muhammad Buhari in the 2011 presidential election, opined that: “It is not wrong to have an annual convention, it is not wrong to have Shiloh or Holy Ghost Congress.
“I have been invited to the congress about three times but I just didn’t have the time to go. Up till the seventh year of the Latter Rain Assembly, we had what we called Annual Believers’ Convention, but I stopped it after then. Look at the population of people in church today and we have negligible righteousness. So, something is wrong.
“I am not condemning what people are doing. If they are called to do what they are doing, God would reward them. But if it is just a clever ploy to continue to control and manage people, one day they would say ‘to your tent oh Israel'”.
Features